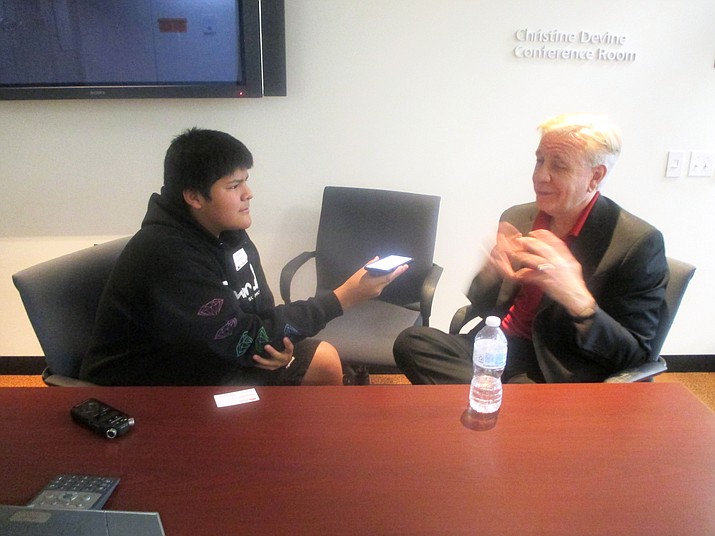 Andrew Honahnie, a video student at Hopi High, said the trip was awesome. He enjoyed visiting the NAZ TV studio at NAU. He hopes to attend the NAU summer media camp.

“Seeing NAZ live at their own studio was the highlight of the trip. The scripts and the cameras are all on one big computer, and the audio is in a little room next to the control room,” he said. “I got to be on the green screen, see the news and learned that you can get hands-on experience as a freshman.”

Honahnie, a senior, said the journalism program at UofA was interesting because one class is taught by Native American journalist Jenni Monet.

“She is the woman who inspired me to become a journalist, to speak the truth to the world and not be afraid,” he said.

Honahnie said at ASU he received good tips about being a good journalist.

“I even tried writing my first day about a therapy dog with two legs. Then I got to be on the radio station on campus to say some of the news, which was awesome, but scary,” he said.

Ellyse Fredericks, a print journalism student at Hopi High, said the media trip gave her new skills that will help her improve as a writer. She said she likes the setup at NAU and plans to major in journalism there.

Ellyse a sophomore, said UofA’s media department was nice because of a friendly environment, but she considered it too far from Hopi and too crowded. However, she is considering attending its summer media camp.

She said she enjoyed the conference at ASU because they had amazing guests and hands-on activities.

“My favorite one was reading a news story on radio,” she said.

Fredericks is considering majoring in journalism at ASU. She is also considering starting at Scottsdale Community College.

“After all the trips I went on, I’m definitely motivated to do more journalism. I love to write and it’s the perfect career for me,” she said.

Gabe Fredericks, video editor at Hopi High, said he loved the NAU media department because their technology was amazing and the people were nice. He said UA didn’t seem as technologcally advanced, but it was a nice family environment. He hopes to attend the NAU summer media camp.

Gabe, a junior, said everyone’s stories he heard during the trip inspired him to tell people’s stories.

“I learned writing is the basis of all forms of journalism,” he said.

Fredericks said the highlight of the trip was listening to UA journalism teacher Jenni Monet because her speech was empowering.

Students said the trip helped them to write better stories and tell stories that need to be told as well as inspiring them to keep working toward a career in journalism. They also learned the difference between advocacy and journalism.

Elisa Casarez, editor of the Bruins Times, said she learned how to read for a broadcast. Casarez said NAU’s media department was “chill,” UofA’s department was professional and ASU’s conference helped keep her journalism skills sharp.

Casarez said the media trip gave her new ideas for the Bruin Times.