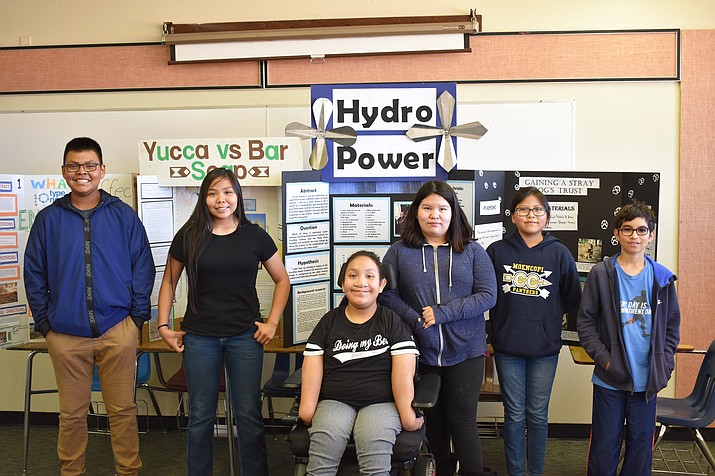 Students from across the Navajo Nation in both Arizona and New Mexico competed for top honors and prizes and the opportunity to represent their communities at the state level competition March 22-23 in Phoenix, Arizona.

The Department of Diné Education hosted the March 1 science fair and is held after 60 local community schools compete in their home communities for the chance to show their research skills and projects. This year 792 students from kindergarten to 12th grade competed in the Navajo Nation Science Fair

Students are encouraged to come up with unique ideas, use research driven methods to reach scientific answers and then defend a scientific conclusion of their project.

James Hanlon, science teacher at Tuba City Junior High School (TCJHS) was thrilled with the 28 students who represented the school this year and was even more thrilled that two of his students would go onto Arizona State Science Fair competition March 22-23 in Phoenix for the Arizona Science and Engineering Fair.

Both Tallsalt and Fulton traveled to Phoenix to present their projects for competition against other schools including non-Native metropolitan schools.

Tallsalt presented three different types of hydro-turbines made from PVC pipe, a 70-gallon water barrel and water pump to see which type of water system would be the most effective for a Native reservation setting where water is scarce and where running water from a large professional manned system is often not available. Tallsalt tested which turbine would produce the most water and at the fastest rate with her project.


Fulton noticed there are numerous stray dogs in every Navajo community. He picked five local stray dogs for his experiment. Fulton tried two different methods to gain the stray dog’s trust. He recorded the time it took to gain the dog’s trust from the moment he approached the dog, gave it food or a dog treat, talked with the dog in a kind, non-menacing tone and then was able to pet or handle the dog without it becoming vicious. Out of the five dogs for the experiment, Fulton said that only one dog did not respond to him, even after offering it both food and dog treats. He said the dog continued to bark at him and did not let Fulton get near him. Fulton concluded that if you show kindness, humanity and offer the stray dog food along with talking to it in a kind manner, most dogs will respond to that treatment pretty quickly.

Beam’s project, “What Effect does Type 1 Diabetes have on the Environment,” based his project on his interest in his younger brother’s recent diagnosis of Type 1 Diabetes and how plastic used in diabetic treatment hurts the local environment.

Between the plastic lancets that are used to test the individual’s blood up to seven times a day, to the disposable insulin needles and caps that also must be stored in plastic locked containers for trash deposit, the amount of plastic that is used in diabetic treatment also becomes a safety and environmental hazard.

Beam thinks there could be a national mandate for biodegradable needles. Beam also thinks diabetics could use an APP on their cell phone to check blood sugar instead of the plastic lancet and wonders if using an insulin pump instead of the insulin needle to inject medicine, then less dangerous plastic would end up in the world’s trash heap.

Wero found that the Yucca soap was more effective at cleaning and removing soil from hands and clothing. She tested the yucca weed soapagainst Dial, Dove and Jergens bar soap. Wero said that the close second to the yucca soap was Dial.

“It turns out that our own Native kind of cleaning soap is better than what you can buy in the store and best of all, it’s free,” Wero said, chuckling.

Begay’s project was “How long does gum flavor last?”

Begay tested five different kinds of gums and timed chewing the gum and how the flavor lasted with each one. It turned out that peppermint gum lasted the longest, which was a little over five minutes Coming in last was Big League Chew.

Hanlon said his students left from Tuba City around 4 a.m. by school bus March 1st to get to Church Rock, New Mexico for the competition. There were seven categories and each grade level had a chance to compete.

Hanlon was also selected to be a judge at the science fair for high school students.

Hanlon said that the junior high science students started preparing for the science fair in the fall semester break this past October.


The students are also encouraged to spend the month of January preparing, thinking of what project they might want to pursue, then researching methods of how to test their project and getting their science board presentation ready.


Hanlon said that originality and thinking outside the box is key to winning at the Navajo Nation Science Fair where competition is stiff, but also exhilarating and inspiring and hopefully will move the students to larger world problem solving skills in the future.