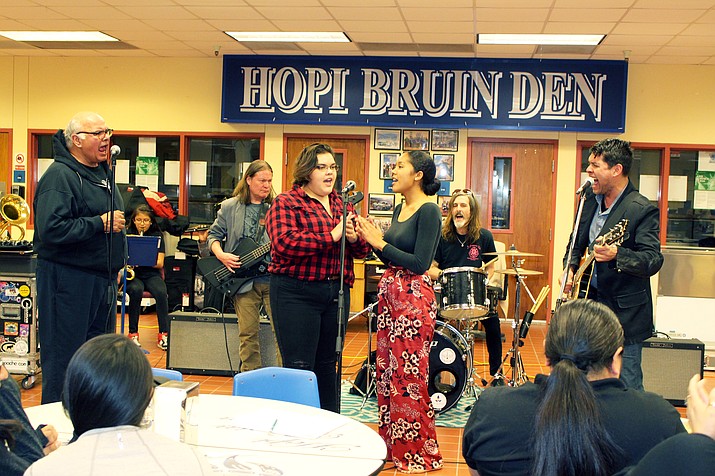 POLACCA, Ariz. — Gary Farmer and the Troublemakers blues band put on a three day workshop March 7-9 at Hopi High School as they performed at a coffee house, a school assembly and taught music students. They also worked with Hopi High video students.

Farmer, a well-known Native American actor, comes from Six Nations in Canada but now resides in Santa Fe. He told the Hopis that they have been close to his heart since he acted as the “world’s big Hopi” in the movie “Dark Wind” in 1990. He praised the Hopi High music and video programs.

“Not many schools are advanced in that way,” he said.

Farmer said he became involved with acting and music because he sees storytelling as a way to change the world. He said his father was an alcoholic and as the oldest child he felt there had to be a way to fix this.

Farmer said theater is powerful in that way.

“If you can move an audience, you can make change,” he said.

While Farmer and the Troublemakers have performed at schools before, he said they have never stayed three days at a school.

Farmer and the Troublemakers were on the tail end of a west coast tour when they came to Hopi High. They hope to have a new CD out in the next couple months and then will have an east coast tour this summer.

Russell, who hails from England, advises youth that if they like an instrument, they should never stop playing it.

Thomas Irwin, music teacher at Hopi Jr/Sr High School, said the performances and visit by Gary Farmer and the Troublemakers was terrific.

“It was great to get together and see musicians who perform at that level. They were serious, but not arrogant. They don’t see themselves as above others. They love what they do and they share it,” he said. “The kids recognized the quality they were watching.”

Irwin said Miller and Russell were superb while working with the students.

“Miller is one of the best guitarists I’ve ever seen, and I’ve seen a lot,” Irwin said. “Miller was a monster on the guitar, but it was Russell who was articulate. He took over most of the instruction.”

“They hit the ball out of the park,” he said.

Irwin said the Troublemakers also gave a good performance for the school assembly.

“Gary relates well to the kids, and the kids loved the performance. You could see that from the way they behaved. They were perfectly still except for when they were clapping and being engaged. Farmer is a great entertainer,” he said.

Irwin said Farmer does a great job promoting the Troublemakers.

He said the Hopi High English students who read poems at the coffee house were superb.

Irwin said the Hopi High music students benefitted from the Troublemakers visit and said when you hang out with serious musicians you catch the fever. You start to think about what you can do.

Irwin said reservation students miss out on the high level of music performed in cities.

“They don’t see that high level of performance. There wasn’t a single soul who was at that coffee house who wasn’t inspired because of the quality of music. That’s why this was important to kids. It also makes this place cool.”

Jacob Lim, a keyboard player in the Hopi High music program, said the visit by Farmer and the Troublemakers was awesome because his peers were enjoying themselves while learning.

“I think the highlight of the visit was the performance because the entire school was able to see their performances and cheer for them,” he said.

Lim said the visit could have been improved if they had more one on one tutoring sessions with the students. He said the performance at the coffee house was spectacular.

“The students performed well and the coffee was good. Having experienced live performances helped the students improve greatly,” he said.

Lim said Farmer and the Troublemakers did a great job working with the students.

“The visit motivated students to practice harder to become better,” he said.

Amber Labahe, an advanced guitar student at Hopi High, said she thought there was nothing better than Farmer visiting the school.

“To see someone who is as busy as him was incredible,” she said.

Labahe was able to perform with the Troublemakers and said that was the highlight of the visit.

“They gave us motivation, inspired us and made us feel at home,” she said.

Labahe said the music students received plenty of information about how to play and the Troublemakers showed them they cared.

“Music is the language that creates a bond and I love that,” she said. “This visit was important because it might have been the only chance to actually have a one-to-one talk about music and journalism.”

Stacy Charley, an advanced music student at Hopi High, said the visit was a chance for students to have their own workshop with the band.

Charley said the Troublemakers were so youthful and students felt comfortable with the band.

“The visit was important because the students needed a wave of hope and the band gave that to us. They showed us that we can be whoever we want,” she said.