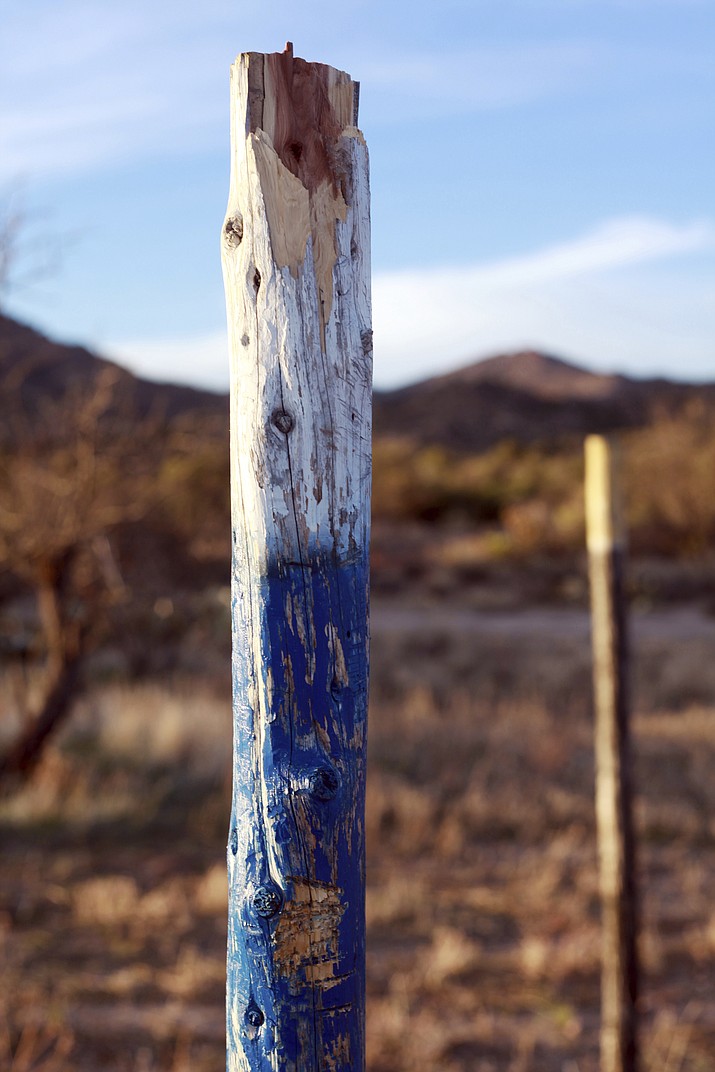 A cross is left vandalized at a prayer site at the Oak Flat Campground in Superior, Arizona. (Vansler Nosie Sr. via AP)

FLAGSTAFF (AP) — A group protesting a proposed copper mine outside of Phoenix says its prayer site was vandalized when two crosses were removed, two others damaged and ceremonial eagle feathers were left on the ground.

Arizona’s Tonto National Forest is investigating last weekend’s vandalism at the Oak Flat Campground in the town of Superior, about an hour east of Phoenix. The campground is adjacent to property where Resolution Copper Mining plans to burrow a mine shaft 1.3 miles into the high desert landscape. It could be the deepest such mine in the U.S.

The group, known as Apache Stronghold, said the copper mine is an assault on their spiritual and cultural practice and believes the vandalism is linked to its protest.

“Anybody with morals knows they can’t do that,” group member Wendsler Nosie Sr. said. “But it has to go beyond people hating what we’re doing to discourage us.”

Jonathan Ward, a spokesman for Resolution Copper, said the company knows of no connection between the protest and the damage to the prayer site. He said one of its employees saw a large group camping in the area March 14 when leaving work and passed that information to investigators.

The campground is popular for off-road vehicle use, hiking and other recreation.

“It’s a public campground, there’s no way of telling who was responsible for it,” Ward said.

Nosie said his group set up the prayer site with four crosses painted black, blue, yellow and white representing the four cardinal directions, each with an eagle feather attached. The area once held Apache prisoners of war, Noise said, and tribal members treat it as holy ground with ceremonies, blessings and other gatherings.

Nosie said he was at the site March 17 around noon and another group member noticed the damage later that weekend. Two crosses were removed and two others appeared to have marks from a hatchet or an axe, he said.

“It’s no different than any other hate crime happening to churches across the country,” he said.

Forest Supervisor Neil Bosworth said the agency is taking the incident seriously and asking for the public’s help. Bosworth received an email March 19 about the vandalism, and investigators went to Oak Flat that day, said agency spokeswoman Carrie Templin.

A voicemail left for law enforcement said an axe was found nearby, she said.

The campground doesn’t require a reservation or a fee, so the forest has no record of who stayed there, she said.

“We are trying to follow every lead we can possibly get,” she said.