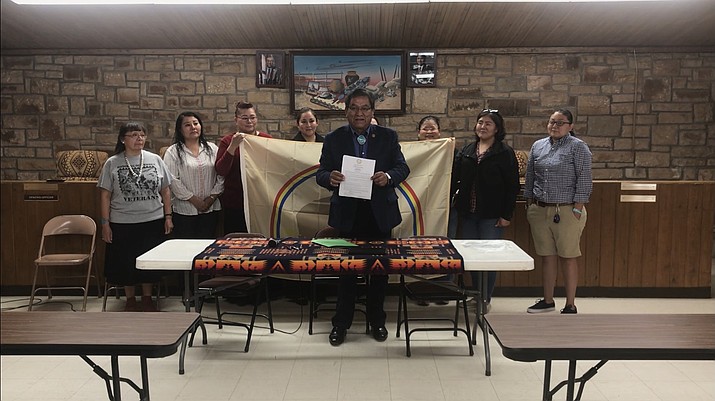 “As a matrilineal society, Diné people have looked to our Diné women for wisdom and spiritual guidance,” Begaye said as he read aloud the proclamation at the signing ceremony. “The Navajo Nation commemorates the fearless service and outstanding contributions of Diné women who have honorably served our nation in the armed forces.”

With the proclamation, the Navajo Nation also acknowledges the challenges and hardships Navajo women veterans face. It celebrates their service and offers gratitude to their families.

Cassandra Morgan, Wide Ruins Veterans Organization Commander, made the final proposal for the proclamation and hosted the signing ceremony at the Wide Ruins Chapter House.

“Gentlemen, take this news, take this lesson to your chapter,” Morgan said. “This is not about saying that we want to be better or anything like that. We want to say, ‘please, look at us too . . . There are women veterans here in our history . . . show pride in them.’”

Over the past several days, Begaye has attended meetings with the eastern and western veteran’s agency and has notified attendees about his intention to sign the proclamation.

Begaye is asking the Navajo people to spread the word and is encouraging Navajo citizens and institutions alike to “acknowledge our sacred obligation to honor the courage and contributions of generations of Diné servicewomen and their families, who have proudly served our great nation, in the name of freedom and K’é.