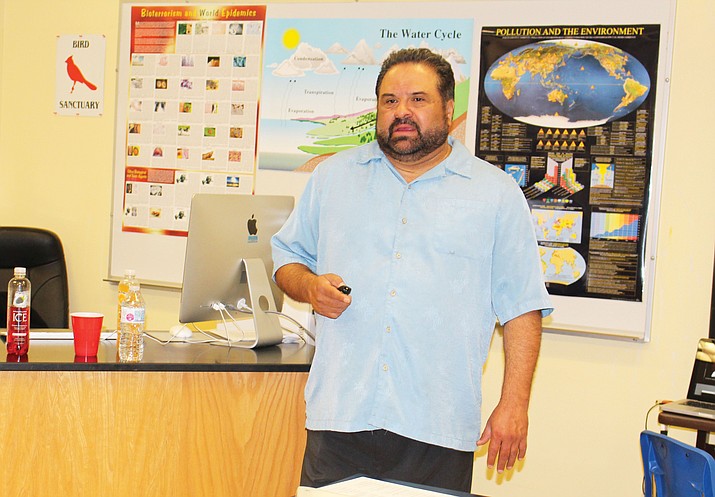 The professional development comes less than a month after a Hopi High student committed suicide.

“The objective is to be alert to suicide,” he said.

Contreras said Coconino County has one of the highest rates of completed suicides in Arizona. He said three ways to prevent suicide are to have mental health resources, medical coverage and substance abuse counseling.

He said one in 20 people think about suicide in any two week period.

“Most people want to help people stay alive,” he said.

Contreras said people need to TALK, which stands for tell, ask, listen and keep safe. However, he did tell teachers they cannot promise secrecy to students who talk about suicide in confidentiality, because as teachers they are mandated reporters. He said teachers, however, should be discrete.

Contreras said some schools, such as one in Leupp, said they do not necessarily call police with suicide issues because it can take police up to three hours to respond. By that time the issue is often concluded.

“NACA can help with policies and procedures,” he said.

He said schools need to have improved policies and communication about clear levels of intervention for suicide prevention.

“We don’t want to point fingers. We want solutions,” he said.

He said the most important part is for the person to listen to the student who is considering suicide. He said the listener should be sensitive and non-judgmental.

He said it is not helpful for the listener to be judgmental, angry, negative, panicked, giving advice or acting impatient.

“Be a good listener. Let them tell their story without judgment,” he said.

Contreras said people need to be alert for suicides and said there was a man pacing back and forth at the railroad station in Flagstaff — nobody asked him why he was pacing or if the man had a problem. The man was killed when he put himself in front of a train.

“We don’t have enough friends. We have a lonely society. The internet keeps us from interacting,” he said.

Contreras said the teachers need to work with the administrators and community to solve suicide issues.

“This is not a school problem, but a community problem. If you try to solve it yourself you will fail,” he said.