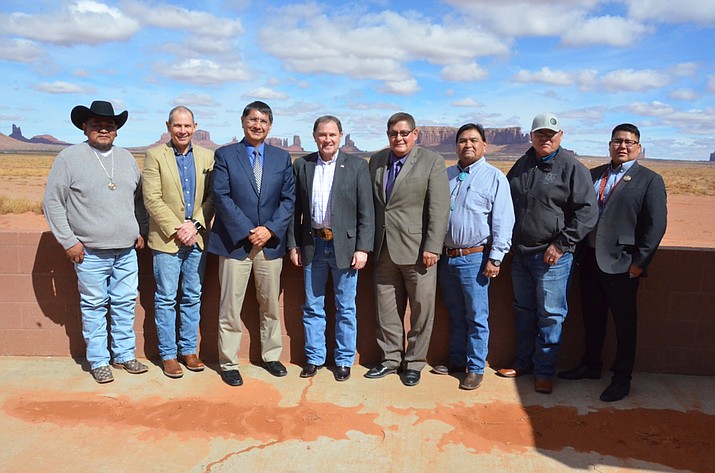 Council Delegates Davis Filfred, Herman Daniels, Jr. and Nathaniel Brown, who each represent Utah chapters, respectfully asked Rep. Curtis to withdraw the bill and sit down together to discuss other possibilities to address the concerns of both sides.

Bates said while it is clear that Utah leadership and Navajo leadership differ in their positions on the monument, it is important for the two sides to sit down, talk and try to find some middle ground on the issue.

“If there is middle ground, it has to start at the local level,” Bates said. “The Navajo Nation Council took a position and we won’t change our position unless the local Utah chapters want that.”

Nez requested Herbert and Curtis uphold a provision that was included in former President Obama’s proclamation that designated the original Bears Ears National Monument, which allowed tribes to co-manage the national monument.

“Before this area was a state, our people resided here and in the Bears Ears area,” Nez said. “Native peoples know what is best for the land because we’ve taken care of the land since time immemorial.”

Herbert said in his view there are three possible outcomes that include having the court decide in favor of the Navajo Nation and other tribes, or having the court rule in favor of President Trump, or working together on a “legislative fix” that allows for the protection of the Bears Ears area and gives Native Americans more control over the management of the land.

“I think there’s been a lot of misunderstanding, some miscommunication, and I think we could’ve done a better job in working together to get where I think we all want to be on this issue,” Herbert said. “As we go forward let’s make sure the communication is better — it ought to be open, it ought to be honest, and we ought to deal with the facts and not what we wish the facts were. I want to see us be proactive and work together to do something better. I’m ready to do it.”

Curtis also expressed optimism that solutions could be developed through the legislative process. He added that he wants to protect the Bears Ears area from looting, drilling and mineral extraction, and allow Navajo people to gather wood and herbs as they have done for centuries.

“I do not have the ability in any way, shape, or form to give you what President Trump took away – I cannot do that. I just don’t have that ability. I do have the ability to give you a legislative answer that I think is even better than what President Trump took away,” Curtis said. “I would hope and ask of all of you is that you give me that opportunity to do all of these things that we agree are important. I need to hear specifically what you want to see differently in my bill. I’m willing to make changes. I’m anxious to make this a better bill. I invite all you to think about how we accomplishment what is most important to all of us.”

The March 12 meeting marked the second time Navajo Nation leaders have met with Curtis and requested him to withdraw H.B. 4532.