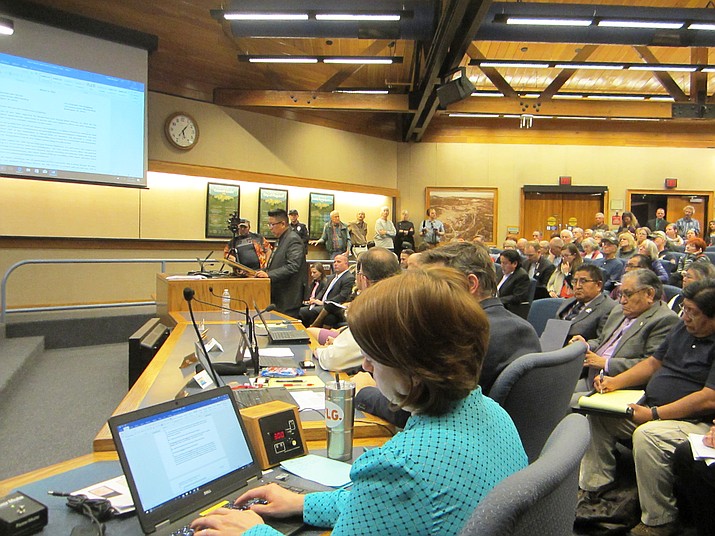 Hopi Tribal Chairman Timothy Nuvangyaoma addresses a joint session of the Flagstaff City Council and the Coconino County Board of Supervisors March 12 in a work session discussing lands that were promised to the Hopi Tribe in the 1996 Navajo-Hopi Land Settlement Act. (Katherine Locke/NHO)

FLAGSTAFF, Ariz. — The Hopi Tribal chairman addressed an overflow crowd March 12 at a joint session of the Coconino County Board of Supervisors and the Flagstaff City Council over land the Hopi are owed as a result of the 1996 Navajo-Hopi Land Settlement Act.

Chairman Timothy Nuvangyaoma said he was grateful for the opportunity to clear up misconceptions that had been circulating about the land swap and said the dialogue was important so people do not judge the situation without all the facts.

Before the meeting and before vocal opposition from the community in Flagstaff, the state of Arizona had been considering swapping 9,000 acres of forest service lands around Flagstaff.

Part of the 1996 Navajo-Hopi Land Settlement Act stated that the Hopi were owed land that was not on their reservation as compensation for land lost, but the tribe made clear that the land identified in draft maps released that the community was upset about was not the land the tribe had been promised or expected to receive.

Arizona State Land Department Commissioner Lisa Atkins made clear that any land that comes out of the state trust land, like the land the Hopi were promised, has to be put back into the trust at the same value, which was why the acres around Flagstaff were originally identified, not because the Hopi wanted that land for the tribe.

“The Hopi Tribe is not trying some kind of land grab for Forest Service lands,” Nuyangyaoma said. “The Hopi Tribe has a profound respect for the sacred landscape and the lands that surround Flagstaff. And all we want is for the federal government and state to live up to the promises they made to my people.”

In 1996, Congress passed a law to compensate the Hopi Tribe for the “illegal possession and loss of their reservation,” according to Nuyangyaoma. The law promised that the Hopi could acquire 500,000 acres of land outside of the Hopi Reservation to replace the lands that were lost. As part of the settlement act, the Hopi Tribe dropped their claims against the United States.

“The United States, the state of Arizona and the Navajo Nation all benefited when the tribe dropped our lawsuit,” Nuyangyaoma said. “But the government has never lived up to its promises in the settlement. All that we have ever asked, and continue to ask, is that the government stand by its word.”

It was for that reason the Hopi Tribe recently asked Sen. John McCain (R-Ariz.) to help them obtain the land they were promised in 1996 because McCain was one of the authors of the law.

“All that we want are the interspersed state trust lands on our Hart, Drye, Clear Creek and Aja ranches,” Nuyangyaoma said. “These are the same lands we have been trying to acquire for the past two decades.”

Those lands are east of the Coconino National Forest and Nuyangyaoma said acquiring and consolidating those lands has always been a priority for the tribe.

“But it is even more important now because of the potential closure of the Navajo Generating Station,” he said. “If NGS closes, the entire regional economy will be impacted. But none will be hit as hard as the Hopi Tribe.”

Revenues from NGS and the Kayenta Mine account for almost 85 percent of the tribe’s general fund, Nuyangyaoma said, adding that unemployment is also high.

“Economic development on the reservation is almost impossible because of how remote we are and the fact that we are landlocked by the Navajo Nation,” he said. “If NGS does close, the situation will become even worse. The Hopi Tribe and my administration need to take action to protect the future of our people and our children.”

Nuyangyaoma said the single most significant thing the government can do to help the Hopi Tribe weather this storm is to live up to the promises it made in 1996 and allow the tribe to obtain its settlement lands.

“These lands will not make up for the loss of NGS related revenue,” he said. “But they will help us to diversify our economy and mitigate the impacts.”

Nuyanguyaoma said he thought it was encouraging that the state and the federal government had come back to the table to live up to its commitment to the Hopi Tribe.

“But there is still a lot of work to be done,” he said. “And we want to work together with our neighbors. All that we ask is that you work with us.”

Most of the members of the public who spoke at the meeting expressed their wish that the Hopi Tribe get the land they are owed, but they wanted McCain’s office and the Arizona State Land Department to identify statewide land that could be used for the land swap instead of land only from northern Arizona. They also asked why the federal government could not pay for the state land that Hopi was promised instead of doing a land swap.

Atkins said that was not possible because any land sold had to be put up for auction.

It was clear from the meeting that the Flagstaff community did not want the land identified by the draft map to be included in the land swap and the Flagstaff City Council and Coconino Board of Supervisors drafted a letter to Rep. Tom O’Halleran and McCain expressing disappointment that the federal government had not lived up to its promise to the Hopi and again expressing the idea of paying cash for the state land instead of the land swap.

All parties said the discussions would continue.