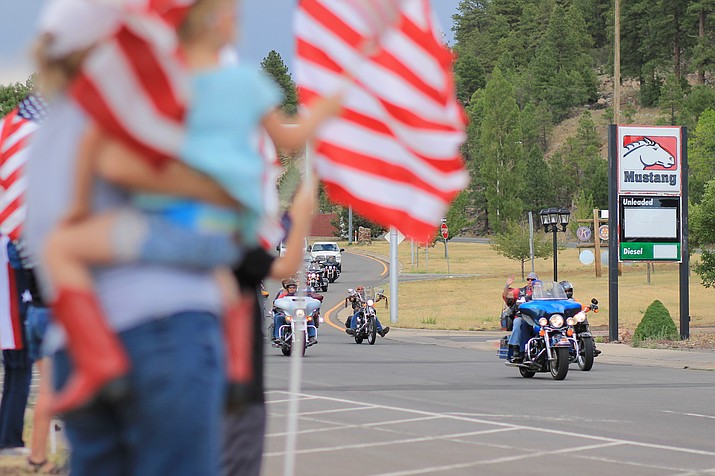 KINGMAN, Ariz. — The Arizona Nation of Patriots will start their portion of the annual Patriot Tour in Kingman July 7 in an effort to raise funds for military veterans and their families, said Rick Bitzer, chairman of the volunteer organization in Flagstaff.

Nation of Patriots gained a huge following after forming in 2008 and launching their Patriot Tour the next year, carrying the U.S. flag through 48 states.

The 2018 Patriot Tour kicks off in Beaver Dam, Wisconsin, on May 19, with riders escorting the flag from one destination to the next for 100 days, culminating back in Wisconsin.

About 100 riders are expected to converge on Kingman for a celebration, flag exchange and lunch at the Elks Lodge. The tour proceeds to Williams, Payson, Flagstaff and Twin Arrows Casino to Gallup, New Mexico, where the Arizona Patriots will pass the flag.

During their stop at Twin Arrows July 10-11, riders from the Navajo-Hopi Honor Riders will meet NOP riders in a show of support.

Honor Riders have met with NOP at Twin Arrows for the last three years. There are currently between 380-400 Honor Riders. Riders are from across the reservation and all of the Four Corners states. Throughout the year the group attends veteran’s events and ceremonies including outreach projects for veterans, welcome home escorts and funeral escorts. West has been with the riders since 2008. His wife, Michelle, and her family have ridden with the group since 2005. West said it is an honor to be a part of the group.

“My father served in Vietnam, my mom served in the Marine Corps, my wife’s family – all of her uncles have served in a branch of the military, her older sister was a Black Hawk Helicopter pilot and my younger brother is currently serving and stationed in Oceanside, California and my other sister is married to a Marine who is also stationed in Oceanside. So for me it is showing support,” he said.

After NOP riders stop at Twin Arrows they will ride to Gallup. In the past, some Honor Riders have gone with the group to transfer the flag in Gallup. Some have ridden with NOP as far as Albuquerque.

“For all veterans, whether they serve two years or 20 years whether they were in conflict or not in a conflict they fought to make (this) possible. All veterans should be thanked for the sacrifices they made. We as Americans, there are so many of us here, and we don’t make that sacrifice and I think a lot of people take that military and veterans for granted,” West said.

All money raised in Arizona goes to veterans in the state who meet the organization’s criteria.

“I ride in memory of my father who was an original Seabee and served four years in the South Pacific in World War II,” Bitzer said. “My father was just one of the many quiet unsung heroes of World War II. And they truly were the ‘Greatest Generation’ in my opinion.”

Dan Smith, regional commander of Arizona Nation of Patriots served in Vietnam and said he hated coming back to people calling him names for wearing the uniform.

“Dan and I, along with some our team members, travel all over Arizona year-round speaking about the challenges our wounded veterans face and why it is so important to recognize their sacrifice,” Bitzer said.

“For many of us, this is not just the tour, but a topic that we are passionate about because we have seen the damage and the lack of funding to help get through the emotional and family crisis a wounded veteran faces.”

“If we can minimize the suffering and challenges of these people who give so much, then it is truly worth it,” Bitzer said. “After you meet some of these vets, your drive to help gets stronger and stronger because they are people who put it on the line for (our) freedom.”

Loretta Yerian contributed to this report