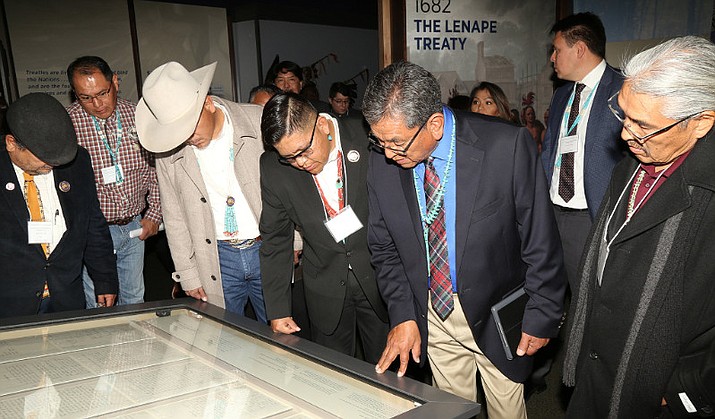 President Russell Begaye and Vice President Jonathan Nez view the Treaty of 1868 at the National Museum of the American Indian in Washington D.C. Feb. 20. (Submitted photo)

WASHINGTON — On Feb. 20, as a part of the Nation-to-Nation Exhibition, the Smithsonian Institution’s National Museum of the American Indian (NMAI) unveiled the original Treaty of 1868, which released the Navajo people from federal captivity, allowing them to return to their traditional homeland.

During the unveiling ceremony, Navajo Nation President Russell Begaye talked about the treaty’s historic and contemporary significance to the Navajo people. The document formalized the tribe as a sovereign nation and solidified its relationship with the federal government.

“The U.S. government doesn’t sign treaties with states; it signs treaties with nations,” Begaye said. “When the treaty was signed, the U.S. indicated and recognized that Navajo is a Nation.”

By honoring the treaty, the museum also is paying tribute to the Long Walk, the U.S. government’s forced removal of an estimated 11,500 Navajo people in a 300-mile march to Ft. Sumner. Known as Hwéeldi in the Navajo language, the fort served as an internment camp while the Navajo were in exile.

Since time immemorial, the Navajo people have existed between the four sacred mountains that define their traditional boundaries: Tsisnaasjini’ (Mount Blanca) in the east, Tsoodzil (Mount Taylor) to the south, Dooko’oosliid (San Francisco Peaks) to the west, and Dibé Nitsaa (Mount Hesperus) to the north. The Treaty of 1868 allowed them to return and reclaim their homelands.

“Diné bi keyah is powerful to the Navajo people and we always want to return there,” Begaye said. “We can only wonder how our elders and medicine people felt when they learned an agreement was reached for their return home. I’m sure there was a lot of joy, prayer and appreciation that our leaders had the fortitude to reach this agreement.”

The 150th anniversary of the signing of the Treaty of 1868 has prompted dialogue among Navajo elders who want to reinforce the traditional perspective of what the Navajo people endured during and after their time at Hwéeldi.

“We don’t often talk about what we went through during this time,” said Vice President Jonathan Nez. “In our separation from our homeland, our people abided by a way of life teaching that called for perseverance. It was a teaching of resilience and strength. We need to inspire these teachings within our younger generation. We need to tell this story from our perspective.” 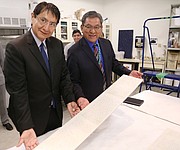 Nez said that although there is much documentation of Hwéeldi and the signing of the treaty, little has been written about the treaty’s impacts on Navajo life beyond facilitating their return home.

“The textbooks that our children read in school cover captivity and the signing of the treaty, but what about after that?” Nez asked. “It’s up to us to rewrite history from our perspective and to tell this story. Our people were on the verge of annihilation with only 10,000 Navajo returning from Hwéeldi. Yet, we are now over 350,000 members strong with a nation of 27,000 square acres of land.”

Before the unveiling, representatives from both the executive and legislative branches offered prayers over the treaty. Delegate Begay led the group in a traditional song to bless the treaty. Later during the ceremony, Elmer Begay, an executive staff assistant for the Office of the President and Vice President, sang a protection song for the treaty’s exhibition.

A century and a half ago, Navajo leaders saw hope for their people in the treaty’s promise of a return home, Nez said.

“We need to reinforce to the younger generation that life is awesome. We need to inspire them to never give up on their goals in life because our ancestors carried resilience all the way to their return home,” he said. “I see 2018 as a great year to be proud of who we are as Navajo.”

The unveiling of the Treaty of 1868 is part of the Nation to Nation: Treaties Between the United States and American Indian Nations exhibition at NMAI. To date, the exhibition has been on display for four years. In June 2018, the treaty will travel to the Navajo Nation Museum in Window Rock to be displayed.

Begaye said the Navajo are strong and resilient people who will continue to survive throughout the centuries.

“Despite any adversity the Nation may face, we will always survive,” he said. “We will always live within the four sacred mountains, and we will maintain our language, stories and prayers. We will hold sacred our water, land and air and teach our children what it means to be Diné. This is what it means for our treaty to return.”