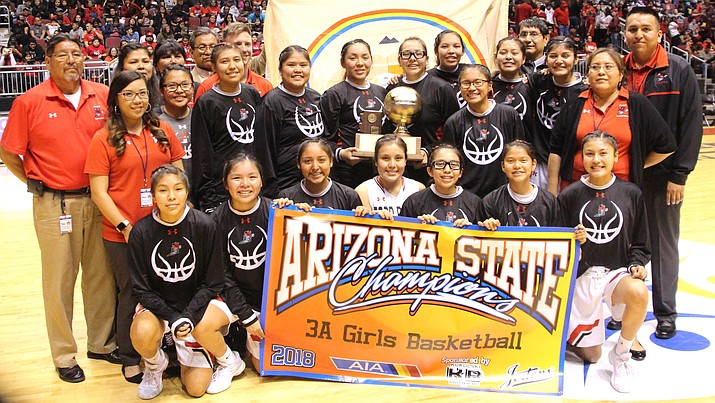 Whitehorse, who is in his second year as coach of the Lady Sand Devils, continued, “I can’t believe that we came together finally and did what we needed to do. Last year was a big letdown, losing by one point, but finally, the pieces came together for us this year.”

“The girls were able to see what this means to their community,” said Jason Franklin, the Monument Valley head coach. “With each win, it’s grown.”

Before the game, a crowd supported the team with a parade and police escort from Kayenta, Arizona.

With sixteen minutes left to the crowning of this year’s girls state champion, 3,800 fans anticpated an exciting finish.

Page converted on three of four free throws to take a three point lead, 21 to 18, Monument Valley’s Jazlyn Lane’s three pointer tied the game at 21 all. There were two ties and six lead changes in the third quarter. Page led 31 to 30 as the quarter ended.

In the final quarter, the Lady Mustangs did not recover and were unable to score for six and a half minutes, until back to back buckets by Lane and Tayla Nez cut the lead to five points 39-34. Page then seal their win with two free throws with 30 seconds left in the game, final Page 41 Monument Valley 34.

‘We pride ourselves on defense,” Whitehorse said. “It takes a lot of hard work.”

“They played hard and played fast, it was our defense that set the tone,” Whitehorse continued. “It causes turnovers that usually leads to easy buckets, for us.”

“It was not necessarily physical but it was mostly mental and emotional fatigue — I think we got worn down a little bit and it made it hard for us to make baskets,” said Monument Valley Lady Mustangs head coach Jason Franklin, referring to the fourth quarter scoring drought.