Letter to the editor: Tribal families have the most to lose when NGS shuts down 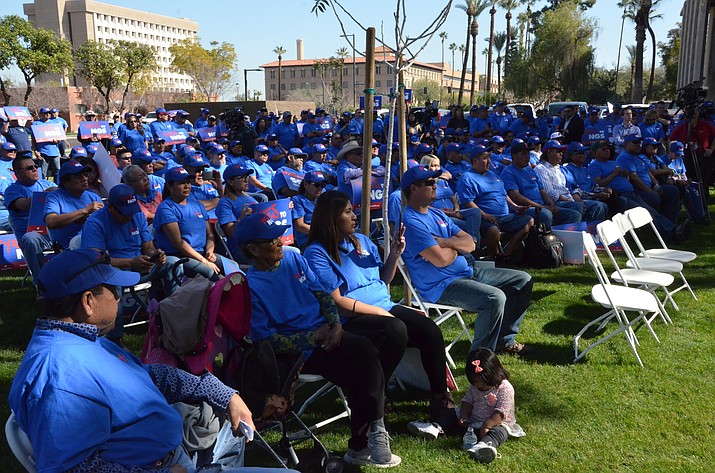 More than 200 Navajo and Hopi employees of Navajo Generating Station, along with family members, gather outside the Arizona Capitol in Phoenix Feb. 6 to show their support to keep the power plant open. Navajo Generating Station, located in Page, Arizona, is a source of revenue and employment for both tribes. Photo/Navajo Nation Office of the Speaker

Strong families create healthy communities and a vibrant Nation. Yet it is increasingly clear that tribal families have the most to lose if Navajo Generating Station is shut down a quarter century before its time.

Our greatest concern must be our children. Parents would have to leave the reservation to find work. Children would no longer have their parents and grandparents with them every day. They would lose those important family connections and cultural traditions. Essential school revenues and dollars for scholarships would be lost.

As tribal leaders look at ways to maintain operation of the power plant for the financial security of the Nation, they increasingly recognize that the Navajo and Hopi families are at the heart of the issue. President Russell Begaye has called for a long-term commitment to keep NGS online. Navajo Nation Speaker LoRenzo Bates has said that the core issue is “the traditional working family and the work they do to benefit tribal people and families across Arizona.”

Last year, the Navajo Council passed legislation finalizing an agreement between the Nation and the power plant owners to ensure operation through 2019. Now the momentum has turned to supporting the transition of plant to a new group of owners that will keep the plant operating in the decades ahead.

U.S. Secretary of the Interior Ryan Zinke has led a process to advance the owner transition, pledging his commitment to working with all parties to keep the plant operational and to protect tribal jobs. Credible buyers have expressed interest, and it’s time to get serious about the transition.

With so much at stake, the United Mine Workers of America has brought together a powerful coalition of labor, industry and consumer groups that are advocating to keep the Navajo Generating Station online long term. The group is led by UMWA President Cecil Roberts, represents more than 100,000 U.S. business and organizations, and is dedicated to creating a transparent discussion that will inform communities and advocate solutions that could allow the plant to operate well into the decades ahead.

We must all join in the effort to protect our families, our communities and our future. It is time to say “Yes to NGS.”