Importance of Native journalists in the media emphasized to Hopi students 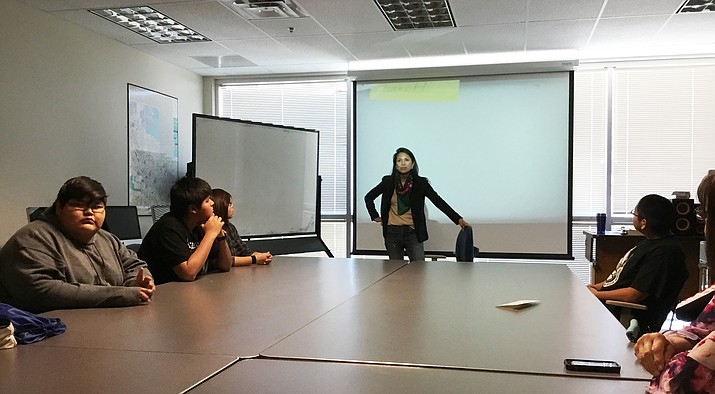 TUCSON, Ariz. — Jenni Monet, a Native American advanced reporting teacher at the University of Arizona (UofA) Journalism School, told visiting Hopi High media students that reporters need to tell the truth and not be advocates for any given position.

Monet, who is Laguna from New Mexico, has been a reporter for more than 20 years. She said the use of the internet for journalism has made the field more interesting.

She urged students to concentrate on writing skills if they plan to work for any form of media and said many radio and television journalists write scripts.

“If you can’t write, you’re not telling the story,” she said. “If you’re not prepared to write then pick another profession.”

Monet also told students she is concerned about the lack of Native Americans in journalism.

“It’s about what’s happening with our narrative and how it gets mangled (by non-native reporters),” she said.

Monet said tribal issues can be complex so this is another reason they need to be told from a Native American perspective.

“I encourage you to put your lens on the news,” she said.

Monet said Native American journalists have to work twice as hard as their non-native counterparts.

Monet was at Standing Rock covering recent events concerning the oil pipeline there. She said many media outlets viewed Standing Rock as another Native American environmental protest, and said they did not want to use those stories.

She told Hopi High media students that it’s okay to push back for equity.

“When you use your voices with integrity, people will listen,” she said.

Indian Country Today is owned by the National Congress of the American Indian, but she said publisher Mark Trahant has said online that the outlet will act independently.

She said it is important that stories are based on fact, especially today where so many reporters are being attacked for fake news.

“There are not enough writing journalism rather than advocacy,” she said.

Monet said the survival of Native Americans is a story in itself.

“We were not supposed to be here,” she said.

Monet said it was wonderful to see high school journalism students at the UofA journalism program.

“I don’t know if you know how rare this is. This gives me goose bumps,” she said.

Susan Knight, another UofA journalism professor, spoke to the students about not limiting themselves to one form of journalism.

“Most journalism programs want you to do it all,” she said. “If you’re just doing one form of journalism you are limiting yourself.”

Knight said in the past five years that podcasts have increased dramatically and said journalism forms are evolving.

Knight said it is good when journalism is paired with other subjects, such as the medical field, because there is a need for medical journalists.

Knight has been a journalist for many years and in 1991 joined the Journalism Department at UofA. After giving birth to her children, she showed others that “you can be a mom and a journalist.”

“I felt like I modeled that role for others,” she said.

Knight also told the students that they shouldn’t let anybody tell them that the news is dead. She said newspapers are dying, but there is a lot of news on the internet. For example, the local newspaper had one story about the Sean Miller UofA basketball scandal, but she quickly found six stories online.

“There is a proliferation of news,” she said.

Knight also spoke about the importance of the First Amendment, saying that journalism is the only business in America that has its own amendment. She said it was not an accident that the forefathers made freedom of the press the First Amendment.

She said there can be no license for journalism because that would get the government involved, and the First Amendment prohibits government intrusion on freedom of the press.