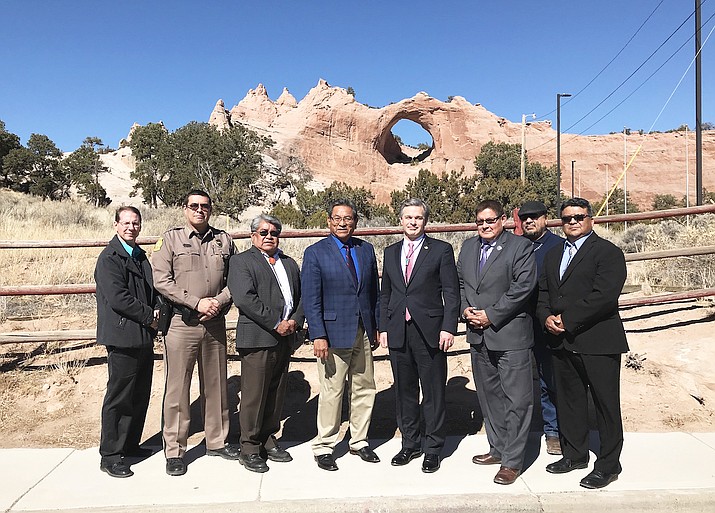 The list also included opposition of a congressional bill, House Bill 4864, that would violate tribal sovereignty.

President Donald Trump appointed Wray to serve as the director for the FBI in August 2017.

Speaker for the 23rd Navajo Nation Council LoRenzo Bates (Nenahnezad, Newcomb, San Juan, T’iis Tsoh Sikaad, Tse’Daa’Kaan, Upper Fruitland) extended his appreciation to Wray on behalf of the council for visiting the Navajo Nation and then delved into improving collaboration with the FBI to address criminal issues on Navajo land.

“Where is the middle ground when the Navajo Nation and FBI collaborate, and how can we make it work on both sides with our federal partners?” Bates asked. “These are the sort of discussions Navajo leadership is open to talking about. Also, the Law and Order Committee members have been proactive in their movement in terms of law enforcement, such as increasing their salaries and supporting police initiatives in addressing crimes.”

“There is a process on the Navajo Nation, and we would like it to be respected,” Yazzie said. “What can the council do to help the FBI and where can we make our laws stronger to aid in your efforts? Navajo leadership is open to having these conversations with the FBI and we look forward to continue working with you.”

Yazzie, a former law enforcement officer, said the Law and Order Committee has been working with attorneys and public safety officials to amend and update the Navajo Nation’s Criminal Code Title 17 to strengthen areas such as prosecution, sentencing and justice for victims.

In addition, Bates also stressed the importance of data sharing agreements with the FBI to better understand crimes occurring on the Navajo Nation such as human trafficking, violence, sexual violence, drug trafficking and other major crimes.

“The Navajo Nation Sexual Assault Prevention Subcommittee has been looking at critical crime areas that are out there, but are not being addressed,” Bates said. “We look to law enforcement and the FBI to do what we need to do to protect our children and bring our abducted children back, as well as properly dealing with the perpetrators. [Trafficking] is new to the Navajo, and when I mean new, I mean in terms of finally addressing it, because it is happening here.”

In response to Bates, Wray recommended the Navajo Nation leadership and public safety officials begin dialogue with the heads of the Arizona and New Mexico FBI offices in terms of data sharing, as well as looking into crime prevention models utilizing the data information.

“A lot of what you are driving at is ultimately the value of intelligence, and this ties into what [Navajo Police Chief Francisco] was pointing out is more of a preventative model in areas of enforcement,” Wray said. “We can have better intelligence on our end, but there are ways to figure out trends that we are seeing and ways we can get in front of it and be a little more thoughtful, rather than being purely reactive.”

He added that overseas partnerships the FBI has developed directly pertain to sovereign tribal nations, because they understand they can no longer use a one size fits all model in dealing with Indian country, and said he hopes to continue a positive relationship with the Navajo Nation.

LOC vice chair and former law enforcement officer Council Delegate Raymond Smith, Jr. (Houck, Klagetoh, Nahat’a Dziil, Tsé Si áni, Wide Ruins) also expressed gratitude to the FBI director and his staff for meeting with Navajo leadership, and said he is looking forward to the agency providing solutions to school shootings and threats made to schools. He added that the recent increase in threats made to schools on the Navajo Nation should be a concern to FBI officials.

Also in attendance at the meeting were President Russell Begaye, Navajo Nation Division of Public Safety, Navajo Nation Police Department and Criminal Investigations and FBI federal agents from the states of Arizona and New Mexico.