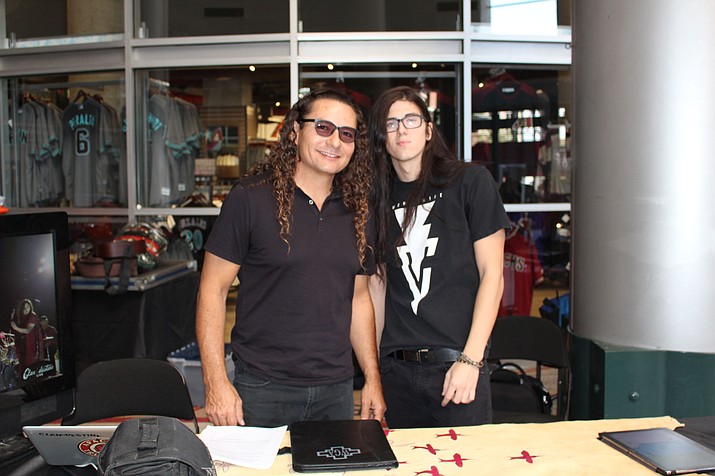 Cano Sanchez (left) and another member of the band Clan-Destine speak at Native American Recognition Day (NARD) June 3 in Phoenix. Navajos, Hopis and many other tribes were recognized during NARD at the Arizona Diamondbacks ballpark at Chase Field. (Stan Bindell/NHO)

PHOENIX, Ariz. — Clan-Destine, one of the most popular and longest-running Native American bands, is taking a time out from most performances as they prepare for a theatrical musical stage show called “Warriors Zeitgiest.” Zeitgeist is the German word for “the spirit of now.”

“Warrior Zeitgeist” tells the story of a warrior and will debut July 21 on the Gun Lake Reservation in Grand Rapids, Michigan, where Clan-Destine member David Montour is from.

Cano Sanchez, frontman and lead singer with Clan-Destine, said he and Montour began working on this project three years ago.

“Native Americans have more similarities than differences with all human beings. This is the battle of every man from birth to death. We’re losing sight of what we have in common. We all need to live life the best we can,” he said.

Sanchez is Lakota, Pueblo and Spanish. Montour, founder of Clan-Destine, is Mohawk, Cayuga, Potawatomi and Ottawa. He plays flute and provides vocals.

The Clan-Destine website says the band has helped define Native American music by mixing vocals, chants, flutes and drums with rock, pop, blues and reggae. Clan-Destine’s message and sound comes together with a desire to live in harmony with their world to create an attractive energy.

After the opening performance on the Gun Lake Reservation they will plan performances elsewhere, especially in Arizona. Clan-Destine has a working relationship with Ak Chin Casino as a regular performer at their Ultra-Star venue.

Clan-Destine is so much more than their live performances — they have a live streaming show on Facebook, podcasts and their non-profit side, called Operation Peace, is involved in suicide prevention and helping people with jobs and businesses.

“We utilize music and media to advance the prevention of suicide,” Sanchez said.

Additionally, Sanchez said he has been gifted to travel the world with Clan-Destine.

“We learned to appreciate the country we live in,” he said. “As a Native American, it’s important to say this is my place. This is my country.”

One reason Clan-Destine puts off gigs, he said, is because they don’t want people to think they are just about the money.

“We are not about money, fame or power. Love is our true aim,” he said. “We come from a beautiful culture. Music is our language and a gift that brings us together. Music is magical.”

“Warrior Zeitgeist,” which will have 12 people, will include at least 16 songs. Clan-Destine is also working on getting its music out to the public, however, they are not planning to release a CD anytime soon.

“We don’t like how our society makes everything so disposable,” he said. “We will start by releasing singles and then as albums, but we will give them away through emails. You have to have known us or seen us in order to get the emails.”

Sanchez said they consider their music sacred and thus it should not be disposable as CDs.

“People start businesses just to sell them. How is that sustainable?” he asks. “If you want quality of life you should shake your neighbors’ hand.”

Operation Peace also works closely with Winslow Guidance Associates (WGA), which provides treatment for everything from DUIs to substance abuse.

“They help people a lot. We work hand in hand with them,” he said. “Treatment of substance abuse is just one part of it. If you are going to heal, there are a lot of issues to deal with. It’s more than just substance abuse. You have to have quality life.”

Sanchez said Shawn Lee, program director at Winslow Guidance Associates, recently met with Bill Gates and WGA could get some grants to help with their cause of helping people.

Sanchez said Clan-Destine doesn’t charge tribes for their performances because they know tribes don’t have money for so many other important issues. He said they were able to bring Los Lobos to the White Mountain Fair and Rodeo one time.

“The world is not as grim as some make it out to be,” he said. “When we ask for money for kids it somehow appears.”

Sanchez said the band members spend a lot of money out of their own pockets. Disney once donated 50,000 worth of toys to their non profit for Christmas and the Midwest Food Bank helped distribute it. The toys were donated to Phoenix Indian Center, American Indian Chamber of Commerce, Navajo Tribe and several other tribes.

“We don’t have a CEO with a big paycheck,” he said about the non-profit Operation Peace.

“We show people how to work and how to start a business,” he said.

Sanchez said the problem with today’s economy is too many people want to be millionaires when they can be just as proud for being a plumber. He said nobody should look down on anybody else.

“Magic is real. Music is magic,” he said.