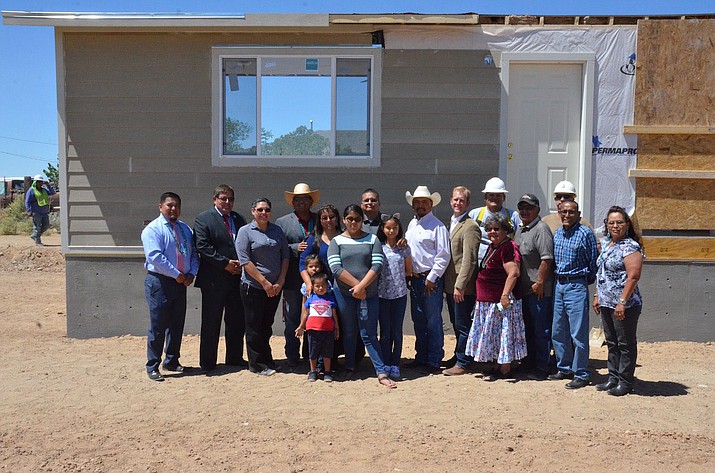 Members of the 23rd Navajo Nation Council with Navajo veteran Johnathan Becenti and his family, and officials with the Southwest Indian Foundation in Tohatchi, New Mexico June 12. (Navajo Nation Office of the Speaker)

The new home was made possible through the partnership of the Navajo Nation Council, Navajo Veterans Administration and the Southwest Indian Foundation, which is a non-profit organization that provides a wide range of services and programs that benefit Native Americans in the southwest.

Begay, who represents the Tohatchi community as a member of the Navajo Nation Council, congratulated Becenti and his family and encouraged other Navajo veterans to persevere in their pursuit of housing assistance.

“As leaders of the Navajo Nation, we understand that there is a great need for housing and other services for our veterans and we know that it is a challenging process, but I want to tell our veterans out there that they should never give up and that we are here to help them,” Begay said.

In 2013, the Council approved resolution CS-48-13, sponsored by Delegate Shepherd, which amended the Navajo Nation Veterans Trust Fund policy to provide funding for the construction of new homes for veterans in each of Nation’s five agencies.

The veteran’s administration, under the Office of the President and Vice President, had issues that were outlined in an audit report produced by the Office of the Auditor General in 2017. The report contained eight audit findings including the lack of financial and expenditure documentation, lack of quality homes built, veteran eligibility issues and veterans’ dissatisfaction upon receiving their completed homes.

In December 2017, the Fort Defiance Veterans Agency Organization requested the assistance of Speaker Bates to facilitate meetings between the foundation and Navajo Nation officials. Speaker Bates coordinated a meeting, which eventually led to the formation of the partnership and the recent signing of a contract to provide 10 new homes for Navajo veterans.

Becenti was the first Navajo veteran to receive a new home through the foundation. Air Force veterans and Navy “Sea Bees,” active duty military personnel build the pre-constructed homes in a warehouse in the city of Gallup, which are then delivered to veterans in local communities. Kieyoomia said the construction labor provided by the Air Force and Navy reduces overall costs tremendously and allows more veterans to benefit from the cost savings.

Chee also congratulated the new homeowners, adding that without the support from the veteran organizations and the Navajo Nation Council, the new homes would not be available to help veterans and their families.

The 1,136 square-foot, three bedroom home will house Becenti, his wife, and five children. Becenti expressed his appreciation to the Navajo Nation Council, Speaker Bates, and the Southwest Indian Foundation for partnering to help Navajo veterans.