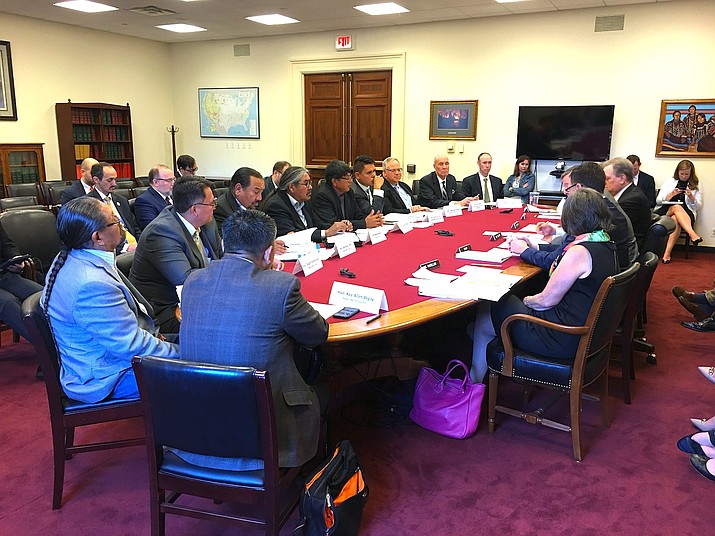 The Navajo Nation Council members discuss the status of the Office of Navajo and Hopi Indian Relocation with federal officials in Washington D.C. June 14. (Navajo Nation Office of the Speaker)

WASHINGTON — Members of the Navajo Nation Council met with federal agencies to discuss the potential closure of the Office of Navajo and Hopi Indian Relocation (ONHIR), which oversees the relocation of Navajo people who were affected by the Navajo-Hopi land dispute settlement.

Members met with the U.S. House Committee on Appropriations Subcommittee on Interior, Environment and related agencies.

Officials from the U.S. Department of the Interior and ONHIR, who were also in attendance at the roundtable discussion, said the Office of the Special Trustee is beginning to plan for the transition of ONHIR’s responsibilities. If funded, the Office of the Special Trustee would need to develop a plan for transition and takeover of land management responsibilities during the 2019 fiscal year.

Council Delegate Walter Phelps (Cameron, Coalmine Canyon, Leupp, Tolani Lake, Tsidi Tó’ii) strongly expressed the Nation’s opposition to the premature closure or shutting down of the Office of Navajo and Hopi Indian Relocation until all promises made to relocatees are fulfilled. He stressed that the federal government still has a responsibility to uphold certain provisions under the Navajo-Hopi Land Settlement Act.

“The fundamental principle is to ensure that every family that can be relocated, be relocated, and not be short-changed in any way. The decisions that were made by the administration to reduce the funding for ONHIR, basically was done without consultation with the Navajo Nation. That is a huge concern for us,” said Phelps, who serves as the chair for the Navajo-Hopi Land Commission.

He added that the Navajo Nation is requesting the subcommittee or the U.S. Senate Committee on Indian Affairs to hold oversight hearings regarding the possible closure of the office in order to provide congressional leadership firsthand accounts from Navajo families who have yet to receive full benefits for the relocation they endured.

Council Delegate Kee Allen Begay, Jr. (Low Mountain, Many Farms, Nazlini, Tachee/Blue Gap, Tselani/Cottonwood) said that as policy makers, it was important to ensure that all obligations of the settlement Act are fulfilled and that Navajo families are provided basic needs promised to them through the statutory obligations.

“We are directly acting on behalf of our Navajo people who are affected by the relocation. Basic human needs are what we are asking for, such as infrastructure, housing, roads, and other needs that need to be addressed,” Begay said. “I ask for your support and your sincere consideration. It is affecting their children and their grandchildren. We are asking for your recommendations and to work cooperatively together.”

According to the original language within the Navajo Hopi Land Settlement Act of 1974, the Office of Navajo and Hopi Indian Relocation was directed to fulfill provisions to provide roads, power lines, water lines, and community facilities such as chapter houses, head start buildings, and senior centers to communities affected by the relocation. However, amendments were later made in 1988 effectively relieving certain obligations of ONHIR.

Phelps stressed that the original provisions are the promises made that the federal government should uphold for Navajo families.

“I do appreciate the comments from the agencies here and the subcommittee members,” Phelps said. “My colleagues know that promises were made in the 1974 relocation laws such as schools, roads, infrastructure, etc. These were the promises made to us in order for us to agree with the relocations. It was in the original law. We didn’t change that law, we didn’t take it out, but it happened at this level.”