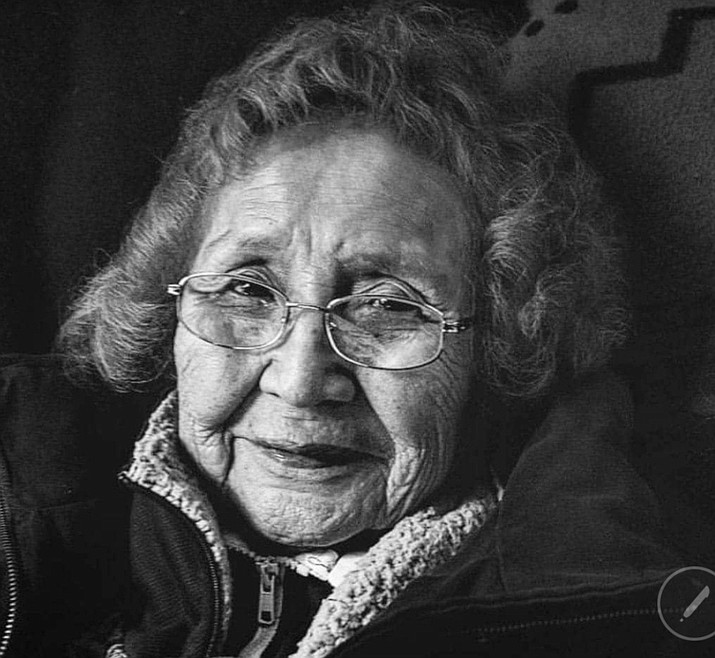 Marilyn was born November 18, 1936 in Coalmine, Arizona on the Navajo Indian reservation to Hatathlii Nez and Rena Hatathlie. Mom was born during the winter with her grandmother acting as a midwife to her mother. She grew up in a Hogan, sleeping on sheep skins, and spent her youth mostly herding sheep on foot. Grandma was always busy trying to keep she and her sisters clean, making clothes out of flour sacks and any material she could find.  She remembers picking onions, eating potatoes, drinking coffee, eating traded vegetables from the Hopi’s and her mom making bread. Little kids just stayed home, they didn’t get to go many places – they played in the dirt.

Grandma would weave to make money for food. She only remembers her dad working on the railroad, he came home late one night and he gave all of the kid’s oranges and apples, that is her only memory of her dad, besides him being gone a lot to sing traditional ceremonies as a medicine man. He had two very large cornfields and three wives. She had no idea how he managed all of that. She was soon taken to Tuba City Boarding school for a few years. She remembered the boarding school teachers were mean and would spank with rulers whenever they became upset. (She remembers) that you sat in your desk, you put your hands on the table, feet together and if you didn’t do it you were in big trouble. As a teenager she remembers traveling with her mom to the trading post and coughing and being taking to Tuba City hospital where she spent a few weeks at the old hospital. It was a lonely stay at the old hospital building as she watched the traffic go by on old Main Street out of her window before her brother Ned took her to Fort Defiance for a TB diagnosis. She was then taken to a sanitarium in Colorado Springs for three years. After her time there she was given the option of returning home or going to school, she chose school.  She jumped on a bus and was taken to Chilocco, Oklahoma.

Mom was an excellent student and graduated from Chilocco Indian School in Oklahoma in 1954. Following school, mom worked in a printing shop before taking a job as a nanny for a prominent Jewish family in Denver, Colorado for three years.  She traveled extensively with this family, even spending summers in Martha’s Vineyard on the beach. After that she returned home and helped her sister Ruth take care of her children unit her oldest child Gina was born in 1969. Her sister Lillian then sent her to Southern California to go to school where she received a technology certification. When she couldn’t find a job in that field she took a class in sewing and quickly attained work at a men’s suit factory. She met our father, Jon Klopfenstein, during that time. He finally asked her out to dinner and a movie, after that she said he wouldn’t stop coming around. Marilyn married Jon Klopfenstein on March 27, 1973, where they stayed in San Diego.  Adair and Jana were born in 1976 and 1978 in San Diego. They had many friends in California and loved spending evenings at the beach barbequing with friends and family each night. The family moved to Salt Lake City, Utah in 1981 after dad lost his job at the shipyard. She and dad travelled extensively together around the western United States, camping and exploring and visiting family and raising their children. Our mom was a devoted wife, mother, grandmother and friend. She loved being with family and traveled constantly to see her grandkids and to spend time with friends. Marilyn was a talented seamstress and loved watching Tiger Woods and the Utah Jazz.