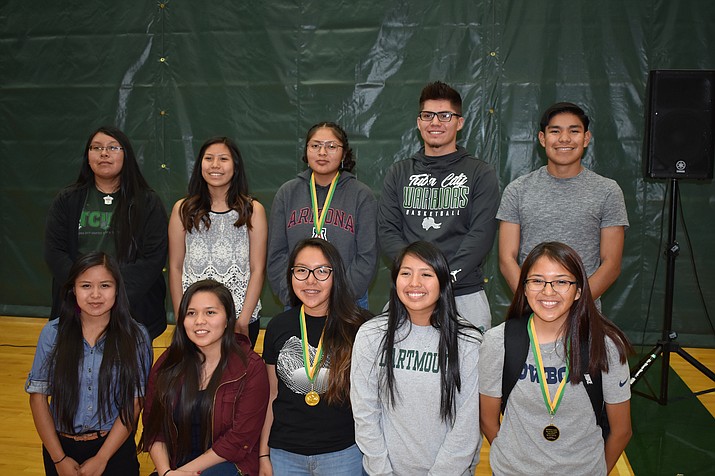 TUBA CITY, Ariz. — It’s not easy to make it to the Top 10 ranking for your graduating class when you’re in a tough, competitive, densely populated reservation school like Tuba CIty High School.

It takes discipline, hard work and staying competitive and interested in what you’re studying. It also takes support from the teachers, your family and community.

Ten special 2018 seniors made the prestigious list this year and all have been accepted to colleges and universities for this coming fall, with many wanting to pursue medical degrees.

Valedictorian Shalyn Nockideneh is the daughter of Sandra and Larry Nockideneh. She has attended Tuba CIty High since her freshman year and has been accepted to Northern Arizona University. She plans on studying either general medicine or sports medicine. Shalyn has been in Honors classes, AP classes, Talent Search and credits her mother Sandra and all of her teachers for her academic success. She also credits her grandparents Lena and Freddie Secody with providing her with love and support that has given her confidence to move onto college.

Co-Salutatorian Kayleigh Paddock, is the daughter of Alverna and Augustine Paddocck. She also has attended TCHS for her entire high school career and has been accepted to Dartmouth College in New Hampshire. She plans to pursue a medical career and hopes to come back to Arizona with a pediatric degree. Paddock credits her life-changing teachers at TCHS for showing how to navigate the rigors of a college schedule. She was able to work on her writing skills and her public presentation and that helped her win a scholarship from Dartmouth.

“I want to thank my family and especially my parents for all of their love and support and encouragement,” Paddock said. “Everything I am, all my success is because of them.”

Marison M. Bilagody is the son of Dr. Melissa Bilagody and Michael Bilagody. Marison has been accepted to the University of Arizona winning a Wildcat Excellence Scholarship this year. Bilagody attended the Young Scholars of Central Pennsylvania and has attending Tuba City Unified School District schools from kindergarten to 12th grade. Bilagody is considering a degree in the medical field, possibly pediatrics. But he also wants to explore his career options once he gets to Tucson.

Bilagody said that TCHS has some of the best teachers, who, though they don’t have every resource available, they are creative and make sure students are learning what they are trying to teach. He credits all of them, especially in the essential areas of math, science, English and writing, to making him college ready.

“My mom and dad were also my inspiration throughout high school,” Bilagody said. ”My dad is a Marine Corps veteran so he would also talk to me, “give me that old Marine Corps motivation” and my mom is a lifelong learner, who has also earned her doctorate in education. Both of my parents graduated from Penn State so they are my own immediate excellent examples of success. I want to thank everyone. My friends, my coaches, and EVERY single teacher at TCHS who I was associated with. Not only were the teachers dedicated to my learning, but they showed me passion for knowledge and also were kind when they needed to be. I also thank my brothers and one sister for always cheering me up if I was having a rough day. I’m so grateful for all of these people who have supported me.”

Zachary C. Bauer, is the son of Lucinda Yazzie and Bryan Bauer. Bauer has gone to TCUSD schools since kindergarten and has been accepted to the University of Arizona. Bauer hopes to become a veterinarian.

“I have been lucky that my teachers at TCHS not only wanted to teach me the core subjects but they also gave me good advice on what to expect in college and how I needed to study and work to perform well there,” Bauer said. “My mom and dad are the most inspiring to me, they prepared me for life in general and would talk to me constantly about being disciplined, working hard. My coaches from sports also taught me about dedication and discipline and to never give up. I’d like to thank my parents, they teach me every day and it helps me prepare for my future to come.”

Summer R. Daw, the daughter of Samatha Max has been accepted to Northern Arizona University in Flagstaff. She plans to go into either the medical field or optometry. TCHS has helped her prepare for college by being a competitive school and gave her a sense of what it will be like in large campus. Daw thanked her teachers, her grandmothers, her Cheiis and her mom.

Turnerlyne Blackhair is the daughter of Hephzibah Robbin and father Earl Blackhair. She has been accepted to Ft. Lewis College in Durango, Colorado for the fall. She would like to pursue a degree in Business Adminstration with a minor in International Business. BLackhair gives her academic credit to her parents. Her mother inspires her because she raised three children, along with caring for her parents.

“My father also sacrificed a lot for my siblings,” she said.

She watches her dad work hard on every single work project he has. Blackhair wants to especially acknowledge Nizhoni Academy for its summer program, which is designed for achieving Native students in science, humanities and environmental science.

“My teachers at Nizhoni prepared me for the intense workload of college and also to remember to produce high quality work,” Blackhair said. “I am grateful for them. I’d also like to thank my Northern Arizona TRIO Program Advisor Eugene Begay. He helped change my life by getting me into Nizhoni. He gave me constant support and advice and help. I’d also like to thank Mr. John Goatcher at TCHS. He’s the Native American Studies teacher and he reminds us to keep our culture alive. I’d also like to acknowledge Ms. Torres, Mr. and Mrs. Macaraig, and Mrs. Crystal Yazzie for their strong academic guidance.”

Martricia Hardy is the daughter of Patricia White and Marvin Hardy Jr. Hardy has been accepted into Ft. Lewis College for the fall and will pursue an education degree.

“My teachers at TCHS challenged me and pushed me to work for high quality work,” Hardy said. “Also my Nali Alma Hardy inspired me because she said, if I kept God first in my life, everything else will fall into place. I am the first person in my family to go to college, so I want to do well. I want to thank my mom, my sisters, my aunties, my boyfriend and his family for supporting me and encouraging me. I know they all believe that I will do well and I am striving for that.”

Celisha Meyers, daughter of Sylvia Seschillie and Amos Meyers, has attended TCUSD schools from kindergarten to 12 grade. She has been accepted at Northern Arizona University and is undecided about a field of study, but she hopes to take some exploratory classes to find her education passion. Mayers credits Mr. and Mrs. Williams, Mr. Tsinigine, Mr. Sam, her parents, all her siblings, AJ, JJ and Sophina, Tami and Brianne for their support.

Dynnika N. Tso is the daughter of Virgina and Benson Tso. She has been accepted at the University of Arizona and would like to pursue a degree in neuroscience or medicine. She credits TCHS with preparing her for college by giving daily support and encouragement to try coursework that was difficult and challenging.

“My parents didn’t go to college but they were constantly telling me and my siblings about how important school and education is to a happy life,” Tso said. “I want to thank them for them love and support and showing me each and every day the ways of a Navajo traditional lifestyle and how that can blend well with modern life.”