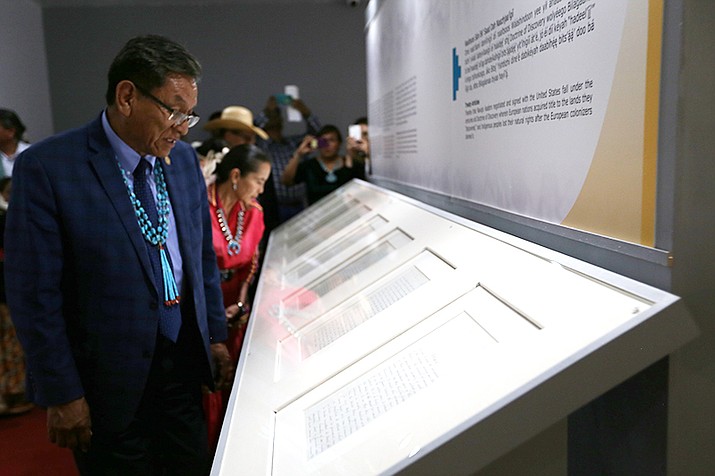 President Russell Begaye and Chief Justice JoAnn Jayne view the original Treaty of 1868. (Office of the President and Vice President)

President Russell Begaye looks at a painting depicting Hwéeldi, which hangs in the newly unveiled exhibit commemorating the 150th anniversary of the Treaty of 1868. (Office of the President and Vice President)

During the event, Speaker LoRenzo Bates (Nenahnezad, Newcomb, San Juan, Tiis Tsoh Sikaad, Tse’Daa’Kaan, Upper Fruitland) stated that the Naaltsoos Sání acknowledges and reflects on the strength, growth, healing and resiliency of the Navajo people in the past, present and future.

“The Naaltsoos Sání is the final treaty that Navajo people signed with the U.S. Government and marks a shift in Navajo history from a time of despair to the reclamation of our independence, sovereignty and self-determination,” Bates said. “Today, we remember the deprivation that our past Navajo leaders and people experienced and their perseverance to retain our homelands, culture, tradition and language.”

Bates said moving forward as a sovereign Nation, the Nation must continue to emphasize the importance of the Navajo way of life.

“Each day, we are blessed and fortunate to practice our way of life within our sacred homelands,” Bates said. “This time allows us to rededicate ourselves as sacred people and remember that we overcame many obstacles and that we will continue to overcome many challenges that are before us.”

To assist in bringing the original treaty back to the Navajo Nation, the Navajo Nation Council approved legislation, sponsored by Council Delegate Alton Joe Shepherd (Jeddito, Cornfields, Ganado, Kin Dah Lichíí, Steamboat), approving supplemental funding in the amount of $350,000 to allow the Navajo Nation Museum to exhibit the treaty for the public to view and acknowledge the 150th anniversary of the treaty signing.

During the month of June, the Legislative Branch will host Diné cultural nights every Wednesday evening and daily tours of the Council Chamber in coordination with the treaty exhibit.

“On behalf of the 23rd Navajo Nation Council, we extend an invitation to our visitors and Navajo people, families, and communities to join us and recognize the Navajo Nation’s journey of strength, growth, healing, and resilience,” Bates said.

The Navajo Nation Legislative Branch Treaty of 1868 event schedule can be found at www.navajonationcouncil.org.