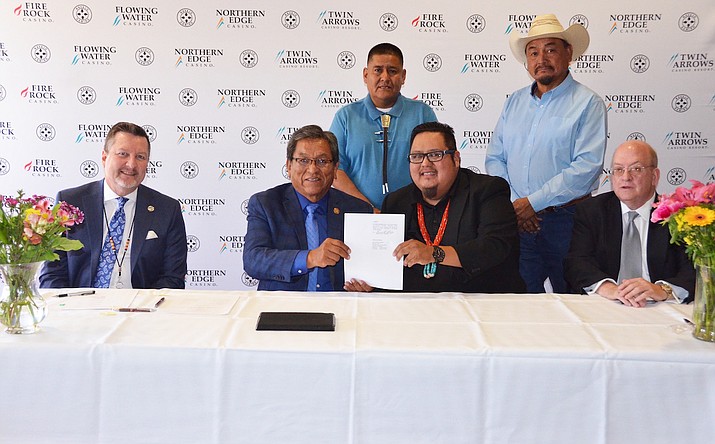 Damon (Bááháálí, Chichiltah, Manuelito, Tsé Lichíí’, Rock Springs, Tsayatoh) was also in attendance for the signing ceremony and extended his appreciation to everyone involved in pushing for the project.

“Through the challenges, the leadership of the Navajo Nation, the Gaming Enterprise, and many others remained persistent and today is the culmination of all of those efforts,” Damon said. “We look forward to seeing the growth of the gaming industry, the revenue, the jobs, and many other benefits that the travel center will produce.”

According to Navajo Nation Gaming Enterprise CEO Brian Parrish, the new development will benefit the Nation’s overall economy by attracting more visitors to the gaming facility, creating more jobs, increasing tax revenues from retail sales and construction costs, business site lease fees, and by establishing infrastructure to support future projects in the area. The enterprise contributed over $2 million for the site development costs including providing electricity and water infrastructure and telecommunications.

The funding for the project is provided through the $554 million trust mismanagement settlement funds that the Navajo Nation received in 2014 from the federal government, which is held in an account known as the Síhasin Fund that was established in 2014.

The legislation also included a provision that requires the funds to be audited on an annual basis with the audit report submitted to the Council’s Naabik’iyátí’ Committee, the Office of the Controller, and the Office of the President and Vice President.