The Winslow color run was the final summer exercise event and was sponsored by Winslow Indian Health Care Center July 24. Held across the Navajo 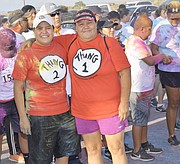 Nation, these twelve summer events were part of an ongoing effort by WIHCC to promote good health and reduce diabetes risk for Navajos. Other exercise activities were held prior to the run, but the Run-Walk 3K/5K has been the main attraction of the health campaign. Winslow High School Cross Country Coach and Move-It promoter Terry Little estimated the July 24 event in Winslow had around 300 participants. Participants of the Color Run were provided with small bags of colored powder which they then threw out at the beginning of the event.