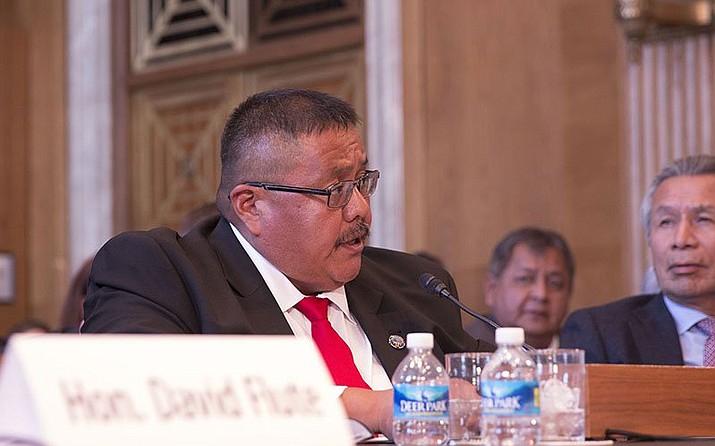 White Mountain Apache Tribe Vice Chairman Kasey Velasquez testifying in 2016 — the first of two appearances before Congress to urge it to pass a bill that would let the tribe deal with its failing groundwater supply. (Photo by Emily Zentner/Cronkite News)

WASHINGTON – The House gave final approval July 23 to a bill that would let the White Mountain Apache proceed on desperately needed improvements to their water system, ending two years of back-and-forth debate in Congress on the issue.

The measure was ultimately approved on a voice vote with no opposition after just five minutes of discussion on July 23.

The White Mountain Apache Water Rights Quantification Act makes clear that federal funds approved years ago to settle a water-rights lawsuit filed against the government can be used for design as well as the construction of a water system for the tribe.

“This bill is simply a straightforward, technical amendment which is necessary to clarify an authorization authority … for the tribe to use the settlement fund for water-related economic development projects,” said Rep. Tom O’Halleran, D-Sedona, on the House floor July 23.

He called approval of the bill long overdue and a critical project.

Officials with the White Mountain Apache Tribe did not immediately return calls seeking comment, but in previous testimony they and others have called the water project essential to the survival of the tribe, whose wells are failing and water is unsafe.

In hearings in 2016 and again in 2017, White Mountain Apache Vice Chairman Kasey Velasquez said he hoped to “live long (enough) to see a child or adult … open a faucet on a kitchen sink to fill a glass of water — something they cannot do today.”

The proposed system will consist of a dam and reservoir, a water treatment plant and 55 miles of pipeline to serve the community, according to a memorandum from the House Natural Resources Committee.

But the project ran into trouble when the Interior Department balked at a tribal proposal to use part of the budget for cost overruns for design and planning on the project. A 2016 bill, introduced by Arizona Republican Sens. John McCain and Jeff Flake, would have clarified that the overrun money could be used — but it stalled in the House after passing the Senate.

The bill was reintroduced in 2017 and this time it passed both the Senate and House — but was amended in the House to include language exempting tribal governments from oversight by the National Labor Relations Board. That led Senate Democrats to block a vote on the bill in April.

Two weeks ago, Flake introduced a new bill, without the NLRB language, that the Senate passed without debate. The House followed suit July 23.

“This bill irons out a lot of problems with the settlement, and it clears the way for hopefully a very productive project,” Rep. Tom McClintock, R- California, said before the House vote July 23.

The final bill also includes a second section clarifying that the Pueblos of Santa Clara and Ohkay Ohwingeh in New Mexico can enter into 99-year leases with the Interior Department on all tribal lands, not just trust lands.

Calls seeking comments from Flake’s and McCain’s offices were not returned July 23. But O’Halleran said that he was pleased to see “broad, bipartisan support” for the bill that solves a pressing issue for the affected residents of rural and tribal communities.

“In 2018, it is a shame to see so many communities that still lack access to clean, reliable drinking water. Yet, for countless families in tribal and rural communities, that is the reality,” O’Halleran’s statement said. “Today, the House of Representatives took action to ensure folks living in the White Mountains can use available resources to get their water systems up and running.”