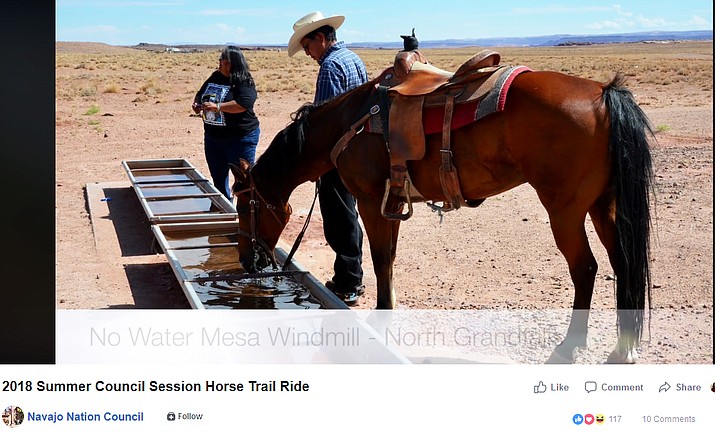 WINDOW ROCK, Ariz. — The 23rd Navajo Nation Council convened on the opening day of the 2018 Summer Council Session July 16, in the Council Chamber in Window Rock.

Prior to opening day, horse riders traveled many miles through several Navajo communities as they made their way to the capital of the Navajo Nation.

The horse ride is an annual tradition that honors past leaders who rode on horse back or in horse-drawn wagons from their home areas to Council sessions. Along the way, they would visit with community members to hear their issues and concerns so they could advocate for them at the Council sessions.

This year, Council Delegate Walter Phelps (Cameron, Coalmine Canyon, Leupp, Tolani Lake, Tsidi To ii) will lead a horse trail ride in remembrance of the late Allen Jones, who served as the grazing official for the Leupp Chapter. The ride began the morning of July 13 from the Cameron Chapter. Council Delegate Steven Begay (Coyote Canyon, Mexican Springs, Naschitti, Tohatchi, Bahastl’a’a’) also led a horse ride from Tohatchi Chapter on the morning of July 15.

On July 16, the horse riders will ride to the Council Chamber from the fairgrounds in Window Rock for the start of the session. Beginning at 9 a.m. outside of the Council Chamber, the Council honored and recognized various individuals and groups for their recent achievements, including the family of Anthony Seigler, New York Yankees’ No. 1 draft pick in the 2018 MLB Draft, Sally N. Pete, CEO of Winslow Health Care Center, Navajo Council on Aging, Taylor Fowler of Blue Gap and several others.

The Council’s first order of business July 16 was to receive the State of the Nation Address from the President of the Navajo Nation, followed by receiving reports from Speaker LoRenzo Bates, Bureau of Indian Affairs, Indian Health Service, Office of the Controller, Office of the Attorney General, and the Office of the Chief Justice.

On July 17, the Council began considering legislations. The proposed agenda are available on the Council’s website at: www.navajonationcouncil.org.

In partnership with the Office of Broadcast Services, the Navajo Nation Council provided live-streaming of the Summer Council Session on the Council’s designated Ustream channel. To view live-proceedings, please visit ustream.tv and search for ‘Navajo Nation Council’ in the search box.