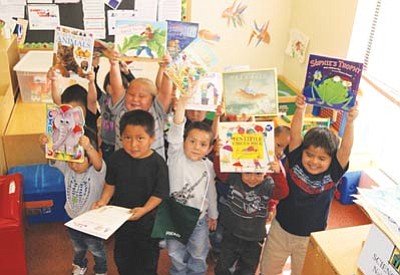 “I have been working with the program and the administration to see how we could keep Head Start in operation,” Hale said. “We understand that 80 percent of the funding is going toward salaries and personnel expenses, but they are the people working at the program every day and working with our children.”

Hale explained that the personnel funding would go toward the continuation of employment for Head Start teachers, teacher aides, bus drivers, cooks and other critical staff who ensure the schools remain open for students.

According to the Department of Diné Education, which is under the Executive Branch, Navajo Head Start submitted a grant application to the Office of Head Start for the period of March 1, 2018 to Feb. 28, 2019, which would be the fourth year of the five-year grant. However, in fall 2017 the U.S. Department of Health and Human Services sought to reduce the Navajo Head Start budget from $23 million to $15.7 million because of under-enrollment, without providing the Nation due process or the option to appeal.

After the ruling by the federal court was made, the U.S. Department of Health and Human Services issued a letter to the Navajo Nation stating the funding would be reinstated, but then rescinded the funding in June stating the department had finally created an appeal process and directed the Nation to submit their appeal within 30-days.

Council Delegate Otto Tso (Tó Nanees Dizí) urged his colleagues to vote in favor of the legislation saying that most current Navajo leadership and their families went to Head Start, and the school served a vital step to preparing them for the k-12 school system.

“We need to support our children. They will be better prepared for school when they start and they learn to communicate with one another. We need to fund head start because right now it is a direct investment in our children,” Tso said. “It is like sending your child to college and getting the kids through school, this is the start of our young ones school life.”

Council Delegate Walter Phelps (Cameron, Coalmine Canyon, Leupp, Tolani Lake, Tsidi Tó’ii) recommended an amendment to the legislation that would stipulate that the funding allocation may be used as matching funds to the federal grant and could extend beyond FY2018, meaning the supplemental funding would not lapse until Navajo Head Start has utilized the entire appropriation.

At the conclusion of the discussion, the Navajo Nation Council voted 17-2 to approve Legislation No. 0259-18 with two amendments. The President will have 10 calendar days to consider the resolution once it is delivered to the Office of the President and Vice President.