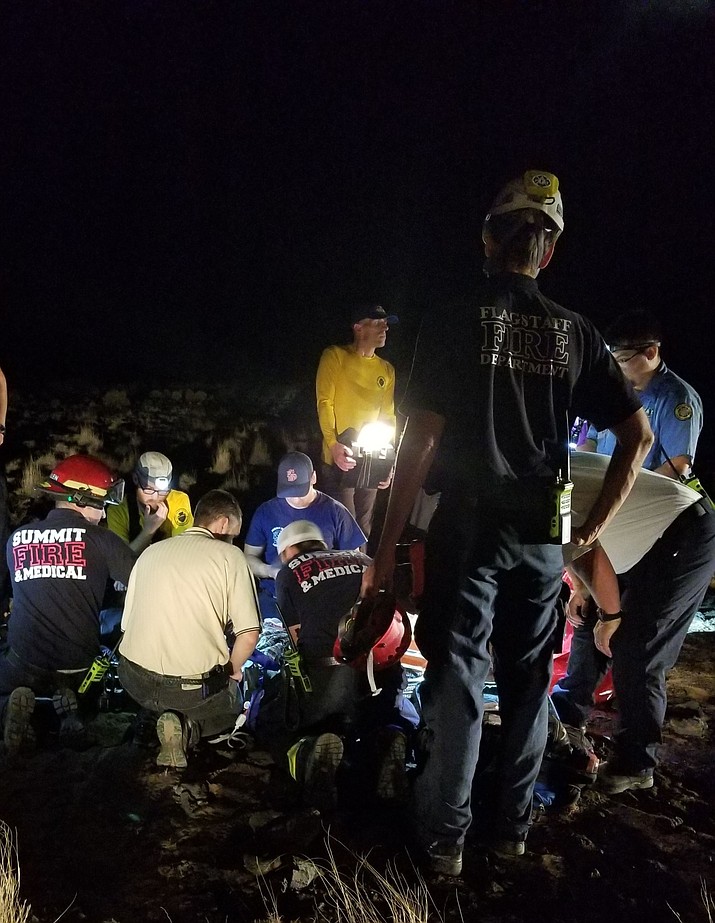 FLAGSTAFF, Ariz. —On July 16 at approximately 7 p.m. multiple agencies responded to rescue an injured hiker at Grand Falls.  The 18-year-old female hiker from Flagstaff had descended a route on the west side of Grand Falls with a group.  While scrambling out, a hand hold that she was using broke loose causing her to fall approximately 30 feet. The hiker sustained non-life-threatening injuries but was unable to climb out of the area on her own.

The Coconino County Sheriff’s Office, Coconino County Sheriff’s Office-Search and Rescue Unit, Summit Fire District, Flagstaff Fire Department, Navajo Nation Fire Department, Navajo Nation Police Department, and Arizona Department of Public Safety Northern Air Rescue responded.  A Heli-Rescue Technician from the Flagstaff Fire Department boarded the Arizona DPS Air Rescue helicopter and flew to the accident site. The helicopter performed a one-skid landing to allow the crew to access the hiker.  The crew carried her back to the helicopter for transport to the parking area.  DPS Air Rescue with an additional paramedic from Summit Fire District on board flew the hiker to Flagstaff Medical Center for treatment of her injuries.

The Coconino County Sheriff’s Office would like to remind visitors to the Grand Falls area that there may be elevated flows due to the monsoon rains that can make hiking to the base of the falls hazardous.  Hikers should be prepared for the conditions and be prepared to change their plans if the conditions do not seem conducive to the activity they planned.

The Coconino County Sheriff’s Office would like to thank all of the agencies that responded to this incident. The team work and relationships between the public safety agencies contributed to the successful outcome of this call.