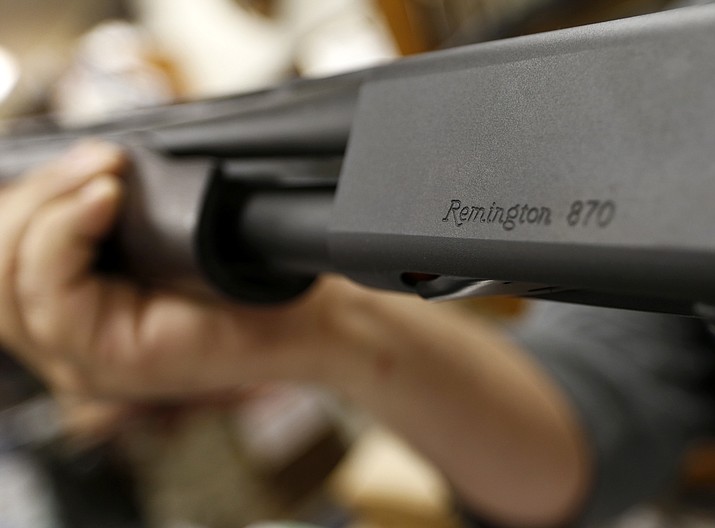 In this March 1 file photo the Remington label is seen on a shotgun at Duke's Sport Shop in New Castle, Pennslyvannia. Earlier this week Navajo Nation President Russell Begaye and the Speaker's Office issued conflicting statements regarding a bid for the sale of Remington to the Navajo Nation. (AP Photo/Keith Srakocic)

Andrew Ross Sorkin reported in The New York Times that the proposal made by the Nation was novel.

“It intended to shift the company [Remington] away from its consumer business, including curtailing the sale of AR-15-style weapons frequently used in mass shootings, to focus on police and defense contracts,” Sorkin said in the article. “The tribe planned to use the profits from those businesses to invest in research and development of advanced ‘smart guns’ — those with fingerprint or other technology intended to prevent anyone but the gun’s owner from using the weapon.”

Sorkin added that the only guns the Navajo Nation planned to sell to consumers were long guns like rifles and shotguns used by hunters and that Remington rejected the bid.

Navajo Nation President Russell Begaye first issued a statement via Facebook saying that neither he nor the Office of the President and Vice President, the Economic Council and the Division of Economic Development were aware of any negotiations to purchase Remington.

“As president, I question the secrecy by which this offer was made,” Begaye said. “Offers that include high dollar amounts and do not include the involvement of the executive branch are highly questionable. It’s my responsibility to protect the Navajo people’s money.”

Navajo Nation Council Speaker LoRenzo Bates said the proposal was brought by the Office of the Controller and presented to the Síhasin Fund Subcommittee, the Budget and Finance Committee and officials within the president’s administration.

Bates said the controller recommended initiating discussions with Remington and to begin due diligence on Navajo involvement.

“The president is wrong in his accusations against council members,” Bates said. “In fact, President Begaye’s administration was directly involved in discussions — whether or not his staff communicated with him is not the problem of the council, but it is a problem within his own office.”

The president’s office reported July 19 that the Budget and Finance Committee discussed the Remington proposal during an executive session special meeting May 29, 2018.

Begaye said his economic team was unaware the offer was being made to Remington by the Office of the Controller and members of the council.

Navajo Nation Attorney General Ethel Branch also said she was unaware of the offer. Branch is also a member of the Navajo Nation Investment Committee, which makes recommendations on any investment of the Nation’s Master Trust Fund.

“It is very disturbing to me that the Nation’s laws for engaging outside counsel appear to have been disregarded,” Branch said. “Those laws are in place to protect the legal and financial interests of the Nation. Our public officials should do their part to protect those interests by fulfilling their legal and ethical duties in following those laws.”

She said as a member of the investment committee, she would have expected to be apprised that the Nation was considering a proposal to buy Remington.

“My office will of course investigate what appeared to be a highly irregular manner by which this supposed investment was pursued,” Branch said. “It is very concerning to me that the amount of the Nation’s investment portfolio has been so publically announced. We can now expect to be targeted by unscrupulous investment brokers, which raises an even greater need for stronger internal controls to protect our trust funds.”

Council Delegate and Budget and Finance Committee Chair Seth Damon said in a statement July 18 that there was no discussion of using money from the Permanent Trust Fund.

“The committee discussed this proposal with the controller as an economic initiative with the potential of bringing potentially thousands of needed jobs to the Navajo Nation,” Damon said. “We have so many people who need and want jobs and that’s what this discussion centered on.”

The president’s office said it has a strong economic plan that embraces business development while assessing the available workforce and resources of the Navajo Nation and says it has reached out to highly accomplished and successful tribal corporations to learn from their successes.

But Leonard Tsosie, Council delegate and chair of the Síhasin Fund Subcommittee, said the administration has no economic development plan to bring large scale employment to the Nation, so the council and committees are taking the initiative to discuss possible ventures to help unemployed Navajo people.

“The subcommittee has not had any formal investments on a so-called deal,” Tsosie said. “Delegates talk about many different subjects, including Remington. When these matters become legislation, the Navajo public will know."

Bates maintained July 19 that the Office of the President and Vice President cabinet members and the Navajo Nation Department of Justice were directly involved in meetings and discussions regarding the purchase of Remington.

“During his time in office, President Russell Begaye has consistently misled the Navajo people on numerous occasions for the purpose of political posturing,” Bates said. “President Begaye is simply attempting to point fingers at the council when his administration was in fact in attendance and directly involved in discussions over the Remington proposal.”

Bates reiterated the proposal was brought by the Office of the Controller, which he said is part of the executive branch, while the president argues that the controller serves at the pleasure of the Navajo Nation Council.

Begaye said he believes the deal blew up in the faces of both the council and the speaker.

“They should have enough integrity to admit that they made a mistake,” Begaye said. “As the news broke, the speaker’s office scrambled to provide damage control to this situation. However, when you’re dealing with $525 million of the Navajo people’s money, your false excuses and statements have no merit. My office will continue to safeguard and protect our Navajo people's money. We cannot allow another financial scandal similar to what occurred in the past with over $35 million in discretionary funds being spent by the Navajo Nation Council.”

Bates pointed out it was conveyed that Remington is not entertaining such discussions.

“As a leader of the Navajo Nation, President Begaye should gather the facts and communicate with the council and the controller before reacting hastily through social media,” Bates said. “Rather than sit down with me to talk about this situation, the president would rather jump to conclusions based on false rumors.”

“We should come together and talk these matters out rather than issuing statements on social media without communicating with one another first,” Nez said.

Read the New York Times article ‘A Surprising Bid for Remington, and an Unsurprising Rejection’ by Andrew Ross Sorkin at https://www.nytimes.com/2018/07/16/business/dealbook/remington-sale-navajo-nation.html