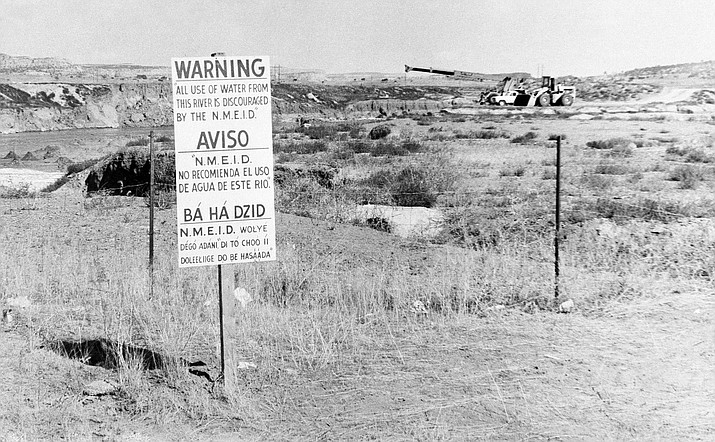 In this Nov. 13, 1979, file photo, while United Nuclear Corp. uses a combination of hand work and heavy machinery to clear up a uranium tailings spill, signs along the Rio Puerco warn residents in three languages to avoid the water in Church Rock, N.M. The Navajo Nation is urging Congress to expand a federal law that compensates people exposed to radiation. (AP Photo/SMH, File)

SHIPROCK, N.M. (AP) — From the end of World War II to the mid-1980s, about 30 million ton of uranium ore were extracted from lands belonging to the nation’s largest American Indian reservation. Today, across the Navajo Nation, sit dozens of abandoned uranium mines and the high risk to residents of contamination exposure.

Now, the Navajo Nation is urging the U.S. Congress to expand a federal law that compensates people who were exposed to radiation resulting from nuclear bomb tests stemming from the Cold War.

Currently, the law only covers people who lived downwind from nuclear test sites in Nevada, Arizona and Utah, as well as workers in the uranium mining industry in a dozen states. But the tribe says it’s time for Navajo Nation workers after 1971 to be included.

“Many members of the federal government are not aware of the effects uranium mining has had on Navajo people,” Navajo Nation President Russell Begaye said. “They don’t see the consequences of radiation exposure.”

In this May 7, 1953, file photo, Navajo miners work at the Kerr McGee uranium mine at Cove, Ariz., on the Navajo reservation in Arizona. The Navajo Nation is urging Congress to expand a federal law that compensates people exposed to radiation. (AP Photo, file)

Most claims under the Radiation Exposure Compensation Act come from the Four Corners region where New Mexico, Arizona, Colorado and Utah meet. Proposed amendments would expand the cutoff for uranium mining workers from 1971 to 1990.

Navajo officials say those workers were exposed to the same harmful conditions.

The push by the Navajo Nation comes as residents of the New Mexico village of Tularosa near the site of the world’s first atomic bomb test also want to be covered under the law. The Tularosa Basin Downwinders and Navajo Nation Vice President Jonathan Nez testified before a U.S. Senate committee last month examining potential changes to the law.

A bill proposed by U.S. Sen. Tom Udall of New Mexico would expand eligibility for payouts under the Radiation Exposure and Compensation Act of 1990.

Tina Cordova, co-founder of the Tularosa consortium, said many who lived in the area weren’t told about the dangers of the first atom bomb test, known as the Trinity Test, on generations of residents and later were diagnosed with rare forms of cancer.

Scientists working in Los Alamos developed the atomic bomb as part of the Manhattan Project, which provided enriched uranium for the weapon. The secret program also involved facilities in Oak Ridge, Tennessee, and Hanford, Washington.

The bomb was tested in a stretch of desert near towns with Hispanic and Native American populations.