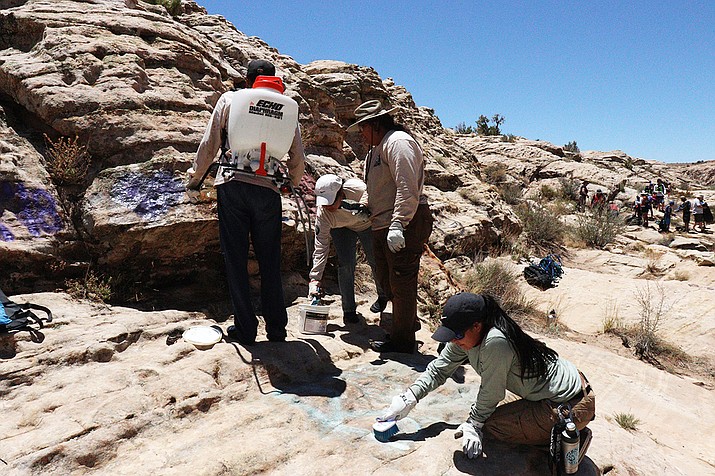 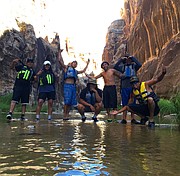 The cleanup was part of the 10-week program that five Hopi High School students, Keith Koruh, Trey Lomayestewa, Alyssa Dallas, Kelly Johnson and Iverson Qumyintewa participated in this year along with their Hopi leaders, Truman Navakuku and Hali Lomayesva. Aiding in the cleanup were 13 elementary students and staff from the Ancestral Lands Zuni Hiking Club led by Marshall Masayesva with the Ancestral Lands Hopi.

“Within the program we have incorporated reaching out to the communities that surround the national parks to teach the students about taking care of a local place like Clear Creek,” said PFNP Deputy Chief of Interpretation Sarah Herve. The Clear Creek clean-up was started as a service day that ends with a chance to swim and kayak in the waters of Clear Creek, with kayaks provided by Adventures for Hopi, of which Masayesva is the program director.

Since 2011, PFNP has been hosting the NCC program, which is aimed at Native American high school students from the Navajo, Hopi and Zuni tribes, as well as the White Mountain Apache Tribe.  The program is designed to give the students an opportunity for cultural immersion into the national park lands, which hold not only the history and stories of the native tribes but also remnants of their ancestors.

Initially, the program was sponsored with grants from the National Parks Foundation but as the years went by Herve said that finding the money got tougher. A couple of years into the program the NCC caught the eye of Ancestral Lands, which is under the umbrella of the Conservation Legacy, a 20-year-old, non-profit conservation corps program, the third largest in the country.

With the help of the Conservation Legacy and Ancestral Land partnership, the program has expanded to 10 weeks, incorporating more parks for the students, while providing them with all their camping gear and uniforms that they get to keep and paying them for the work they do.

“I can see NCC continuing for a number of years,” Herve said. “It is luxurious to have a partner like Southwest Conservation Corps working with us.”

In 2008 the Conservation Legacy established the Ancestral Lands program model based at the Pueblo of Acoma, N.M.

“The Ancestral Lands drew a lot of interest in Washington, D.C., due to their push to work with underserved audiences,” Herve said.

The goal of Ancestral Lands is to engage Native American youth and young adults in meaningful conservation projects on Native lands and since many of the national parks envelop those lands, joining together made sense.

During the 10-week period, the NCC students live and work within the national parks, camping out under the stars and working alongside the geologists, paleontologists and archeologists, under the leadership of their tribal members to learn how the Native American history, stories and languages blend into this ancient world.

“We want them to feel a connection with the national parks, especially here in the southwest where there are so many parks that are a part of their heritage,” Herve said. “We also want the students to know they can have a meaningful career close to home. We need their help to tell the story of their people.”

The Conservation Legacy is crucial in helping to interweave all the facets of the project, from recruiting students and leaders to setting up transportation.

“They take on a role of providing the youth with immersion,” said Herve, whose job is to support the grounds coordination. “A lot of the leaders that they find are deeply connected with their tribes. They will have conversations with these students that I can’t have, and that deepens the experience.”

“When we started this in 2011, we had an all Navajo crew,” Herve said. “We didn’t know what we were doing; we just had a dream that this would be a cross cultural immersion and the kids from that first summer helped us to see how important it was to have a multi tribal program.”

Since then, the program has seen students from the nations of the Zuni, Hopi and Navajo continue to enter the program.

“It is open to any Native American high school student,” Herve said. “It doesn’t matter what tribe they are from. This is a way to connect Native Americans with national parks.”

From the Petrified Forest, this group of Hopi students will continue their education and exploration of their ancient birthright as they travel the lands of the Grand Staircase-Escalante, which is part of the Glen Canyon National Recreation Area in south-central Utah; the Grand Canyon National Park in Arizona; Joshua Tree National Park near Twentnine Palms, California and Muir Woods, north of San Francisco in California.

“A big part of this program is to help these students retain their connection to their heritage,” Herve said. “We want them to be excited about who they are. Petroglyphs in this area tell a lot of their stories; stories that were carved along the historic travel corridor that followed the Puerco River. The same travel corridor that Route 66 and Interstate 40 follow today.”