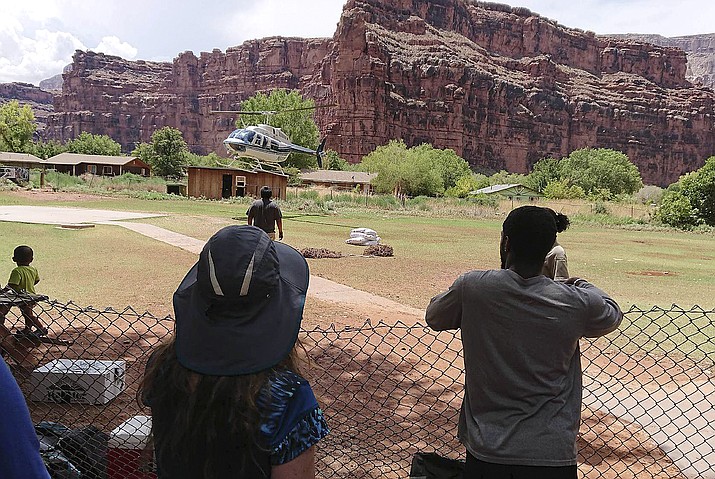 This Thursday, July 12, 2018 photo released by Benji Xie shows a helicopter landing to rescue people from flooding on the Havasupai reservation in Supai, Ariz. Rescue workers were evacuating about 200 tourists Thursday who were caught in flash flooding at a popular campground on tribal land near the Grand Canyon where visitors go to see towering blue-green waterfalls. (Benji Xie via AP)

SUPAI, Ariz. (AP) — The Latest on flash flooding at famous waterfalls on the Havasupai Reservation off the Grand Canyon.

An evacuated hiker says people were swimming at the base of famous waterfalls deep in a gorge off the Grand Canyon when flash flooding struck, sending them scrambling for higher ground.

Benji Xie (shee-EH') said Thursday the skies opened up, sheets of rain fell and mud waterfalls appeared on both sides of the gorge on the Havasupai (hav-uh-SU'-peye) Reservation.

Water crept up around people's tents and Xie and his friends began warning other campers to flee.

Xie said some people were stranded on islands that formed in the water, while others climbed up trees or took shelter in caves.

He said as water receded, members of the tribe used ATVs, rope and manpower to rescue the roughly 200 stranded tourists before helicopters were deployed.

Tribal spokeswoman Abbie Fink says all the tourists are accounted for and no one was seriously injured.

Xie praised the tribe's response and said people were generally in good spirits.

About 200 tourists are being evacuated from a campground on tribal land near famous waterfalls deep in a gorge off the Grand Canyon.

Officials with the Havasupai (hav-uh-SU'-peye) Tribe say their reservation was hit with two rounds of flooding Wednesday and early Thursday.

An emergency response team is moving tourists from the campground below the tribal village to a school.

Tribal spokeswoman Abbie Fink says the people slept in a community building and will be helicoptered out Thursday.

She says all the tourists are accounted for and no one was seriously injured. The tribe also provided food and supplies.

The reservation is known for its blue-green waterfalls. Spots in the campgrounds sell out quickly every year.

Fink says the reservation will be closed to visitors for more than a week as officials assess the damage.