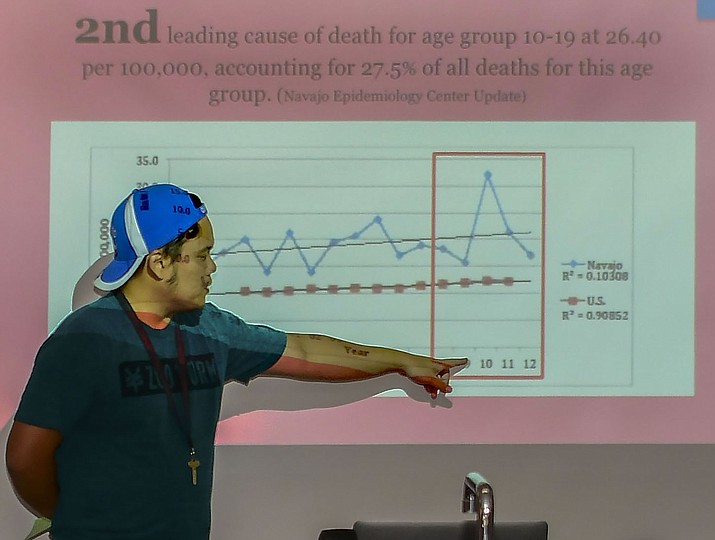 The presentations were a part of Dr. Mark Bauer’s assignments on suicide, sexually transmitted infections and smokeless tobacco usage.

The little more than a dozen students were required to select a Navajo Nation community, describe and assess the needs of the community, plan a health program and design evaluations. The topics were based on a Navajo Wellness Model and applied to Tuba City, Shiprock and Fort Defiance.

“I think we saw some interesting presentations that a lot of research was put into,” said Bauer, the lead Shiprock-based Diné College science professor who oversees SREP. “From here the students start their practicums and arrive at a set of conclusions.”

Kellen Polingyumptewa, a student at Northern Arizona University in Flagstaff and a graduate of Hopi High School, was part of a four-person group that delivered a presentation on the dangers of smokeless tobacco. The others in Polingyumptewa’s group were Daangoiina Haven, Ticola Madisen and Charles Robbins. Each attends college in Arizona.

“This ties into the Navajo concept of “hozho (beauty, wellness and balance),” Polingyumptewa explained. He said the group came to the conclusion that through ads and posters, potential young smokeless users can see the clear and present danger with chew.

“Smokeless tobacco use is something that needs to change for future generations,” Polingyumptewa said. “One of the things we wanted to portray was the difference between traditional and commercial tobacco use. And a lot of times perception plays a role in usage.”

About six of those participating in this year’s SREP were Diné College students, Bauer said, with the remainder of the students in the program coming from Arizona schools as far south as Arizona State University and the University of Arizona. Polingyumptewa goes to Northern Arizona University in Flagstaff and graduated from Hopi High School.

Bauer said for the first three weeks of the program, the students are entirely at Tsaile, with the next six weeks serving as a time when students are placed in internships with a health program.

“We try to place the student in a health research project being conducted in the area,” Bauer said. “They will have a role that includes volunteering and assisting with some of the community outreach activities of their site, and specifically, looking at some of the participant data from the site to help the program.”

“The impact is that this kind of slogan could reduce the use of smokeless tobacco,” Polingyumptewa explained.

Bauer has run SREP for the past 19 years. He holds a doctoral degree from Northwestern University in Illinois.