TUBA CITY, Ariz. — Tatyanna Begay has always been an intelligent, friendly and hard- working student. That was the consensus at a Student Academic Achievement Awards Ceremony at Diné College in April.

“(Diné) College will always be a part of your future,” Diné College President Monty Roessel told a small group of student achievers and members of their family. “Today is a day in which each of us is proud.”

Begay, 26, is from Jeddito, Arizona, on the Navajo Nation Indian Reservation, and is a junior majoring in psychology. Begay received a certificate of academic excellence award and is set to travel to George Mason University in Fairfax, Va., in May as part of a research team in a program sponsored by the federal Department of Homeland Security’s Center for Criminal Investigations and Network Analysis. 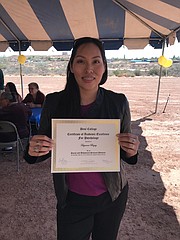 There are two students from Diné College that were chosen for the 10-week program. The other student is Ashley Lee of Tsaile. The Diné College instructor traveling with the two is Sara Kien, Ph.D., who teaches social and behavioral science classes.

“I’m very thankful that I got the award and I want to thank my instructors, especially,” Begay said after receiving the honor. “(Diné College) is a place where I know I can be successful. Thank you to the College.”

Begay said she ultimately wants to go into Native American psychology and study solutions to suicide and gun control. Both issues are problems around the Navajo Nation. Both students said they aspire to graduate studies at a major research institution.

Begay added, “I’m interested in studying the spiritual and holistic aspect of the discipline (psychology) as it relates to Native Americans,” Begay explained. “The Native suicide rates are very high.”

There were similar award ceremonies at the Shiprock and Tsaile campuses this week. The three ceremonies were broadcast via Diné College’s KXWR radio station and come about two weeks before graduation at Diné College.

At Thursday’s awards ceremony, Begay, who graduates in May 2019, was recognized for consistently achieving a grade point average (G.P.A.) between 3.5 and 4.0. All in all, there were more than 100 students recognized for high academic achievement at the Tuba City, Shiprock and Tsaile campuses.

The recognitions come amid Diné College’s 50th anniversary. There are activities like a gala and a golf tournament.