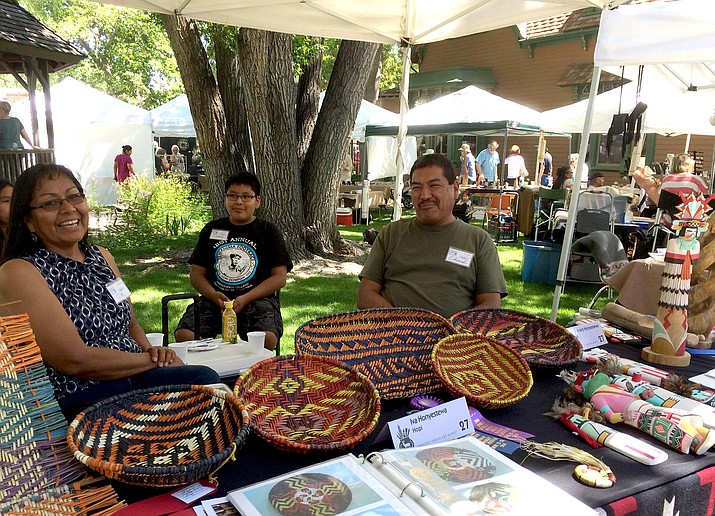 In this file photo Iva, left, and L. Edward Honyestewa, Hopi, sell basketry made by Iva and wood and stone carvings made by Edward at the 2017 Prescott Indian Art Market at Sharlot Hall Museum in downtown Prescott, Arizona. (File photo by Sue Tone/Daily Courier)

Harrison has been creating his jewelry for more than 30 years.

“It’s always an honor to be the featured artist. It makes you recognize yourself for the successes you have made and it’s also good to be recognized by your peers,” he said.

Harrison has won many awards during his career for his Native American jewelry. Most of his work is contemporary, but he still uses his Navajo tradition.

This is the sixth year that Harrison will have his art at PIAM.

“The Prescott Indian Art Market is right up there with the best art shows. It’s well managed and well juried. There are a lot of prestigious artists there and I was elated to be the featured artist,” he said.

Harrison knows about the best Indian art shows as he hits about 20 of them during the year including Santa Fe Indian Market, Heard Museum and Smithsonian.

PIAM has more than 100 Native American artists as they display traditional and contemporary pottery, jewelry, paintings, carvings, weaving and sculpture. Native American musicians will perform and there will be demonstrations by the artists. Fry bread and other food will be available for purchase. Seven highly skilled Native American artists serve as the jurors for any entry in the show and select the winners.

Harrison uses a mix of jewelry designs that are his own creations as he spins Arizona and New Mexico skies, landscapes, spiritual beings such as yei be cheis, native symbolism, red rocks and mesas.

“The key to being a good artist is you have to create something that no one else has done before and that separates you from the others,” he said.

Part of what makes Harrison different from other Native American jewelers is that he uses stones from all over the world. He uses a lot from Russia and Thailand, but his Australian opal is in demand.

“I use a lot of yellow jade. I go beyond the basic turquoise,” he said.

“The designs tell you who you are. It’s where you come from. I have a lot of connection with traditional people, mother earth and nature,” he said.

In 2005, Harrison went back to Paris as a guest artist with the World Desert Foundation. This foundation teaches people that about 70 countries with desert environments, each with differences in how they live in the desert to the art they create that relates to the desert.

“I gave presentations about my art. I told them I am Navajo and this is what I do coming from the desert,” he said.

Harrison was part of a group in France that included Navajo singers and sand painters.

“The Paris trip was successful. I did a lot of interviews and spoke to school kids,” he said.

“If not for him, I wouldn’t be here. His father (silversmith) Preston started him out and then I used to watch him work. I was an artist already, but he inspired me to make the transformation from pastel work to jewelry because I saw him make that transformation,” he said.

Harrison and Monongye became buddies when they went to Ft. Wingate High School.

Harrison also dabbles in music. He studied composing at the University of New Mexico and he plays the guitar. His music was put on hold for his artistry, but he continues to play the guitar for fun.

“I used to play country rock and western at rodeos with my buddies.” he said.

Harrison’s advice to young aspiring artists is that they need to do something to be different.

“First I tell them to get an education. Train yourself, but go to an art school. Come up with designs that nobody else has,” he said.