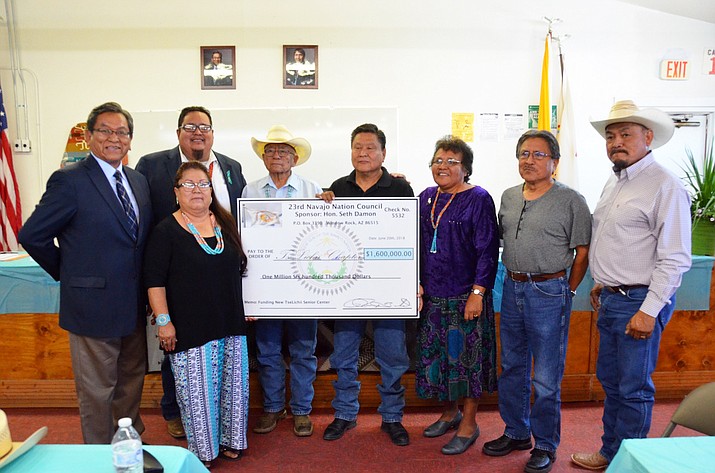 (Office of the Speaker)

Damon, who represents the Tsé Lichíí’ community as a member of the 23rd Navajo Nation Council, acknowledged that it took the combined efforts of many individuals over several years to secure approximately $2.3 million from various sources for the design and construction of the 5,000 square-foot facility.

“When I took office, there were several individuals that told me that the community wanted a new senior center and I told them that I couldn’t guarantee that it would happen, but with all of your help in pushing this initiative forward, we are here today to celebrate the fact that the Red Rock community will be getting a new senior center,” said Damon, who also noted that senior citizens currently utilize the chapter’s Head Start facility to serve meals and to provide activities for local elderly people. On average, the program serves 35 individuals daily, he added.

On April 17, the council approved resolution CAP-35-18, a $100 million investment plan to fund power lines, water lines and various capital improvement projects across the Navajo Nation. The funding comes from the Síhasin Fund, which was created by the Council in 2014 when the Navajo Nation received $554 million as part of a settlement agreement related to litigation over the federal government’s historical mismanagement of the Navajo Nation’s trust assets.

The $100 million investment plan included $1.6 million for the Red Rock senior citizen center. In collaboration with New Mexico State Sen. George Muñoz (D – Dist. 4) and the Office of the President and Vice President, the chapter was able to secure $200,000 for the architecture and design phase, an additional $450,000 from the state’s Tribal Infrastructure Fund, and $200,000 from the Navajo Area Agency on Aging program to cover the overall cost of the project.

Damon praised the efforts and hard work of the chapter officials, Community Land Use Planning Committee, Legislative District Assistant Lester Yazzie, and his Council colleagues. He added that his next focus would be to improve public safety and to improve roads within the six chapters that he represents.

Síhasin Fund Subcommittee member Delegate Chee congratulated the community for its achievement and said he hopes the new center will help build stronger family ties and provide an atmosphere to share cultural and traditional teachings.

Damon said the chapter anticipates construction of the new senior citizen center to begin in January 2019, following the completion of the initial phases of the project.