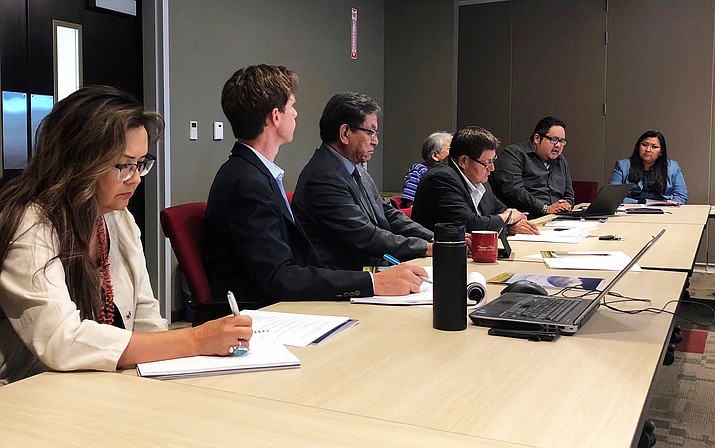 TSE BONITO, N.M. — A meeting was held June 21 to discuss the implementation of the second round of the federal Land Buy-Back Program for the Navajo Nation.

The meeting was attended by members of the 23rd Navajo Nation Council, President Russell Begaye and the Eastern Navajo Land Commission office met with officials from the U.S. Department of the Interior’s Land Buy-Back Program, Appraisal and Valuation Services Office, Bureau of Indian Affairs and the Office of the Special Trustee for American Indians.

In 2012, the Cobell Settlement which stemmed from a class action lawsuit over claims that the federal government mismanaged and incorrectly accounted for the income from Indian Trust assets — specifically Individual Indian Money accounts. Out of the total settlement award of $1.9 billion, $1.5 billion was allocated to purchase fractional land interests, $285 million for implementation and administrative costs, and $60 million for scholarships for Native Americans.

The council approved legislation in April 2014 that authorized former President Ben Shelly to sign a cooperative agreement with the federal government to allow the Eastern Navajo Land Commission to hire staff, educate Navajo landowners and coordinate sale offers under the implementation of the program on the Navajo Nation.

During the June 21 meeting, Council Delegate Seth Damon (Bááháálí, Chichiltah, Manuelito, Tsé Lichíí’, Rock Springs, Tsayatoh) and Eastern Navajo Land Commission office director Larry Rodgers, emphasized the need for sufficient resources and funding to effectively implement the second round of the program, because of the allotment landownership population, land size and the geographic distribution of allotment lands throughout the Navajo Nation.

“The Navajo Nation is different than other tribes, and in order to make this second round a success we need to make sure that the Navajo Land Buy-Back Program operation has adequate resources to reach as many allotment owners as possible and return as much land to the Navajo Nation as possible,” Damon said.

Prior to the start of the second round of the program, the Naabik’iyátí’ Committee of the Navajo Nation Council will have to consider and approve a new cooperative agreement. Once finalized, outreach efforts will begin early next year followed by appraisals of fractionated allotment lands. The program anticipates mailing offers to landowners by summer 2019.

As of June 21, federal officials said they will allow allotment owners up to 60 days to consider whether or not to accept offers from the federal Land Buy-Back Program. Federal officials emphasize that the program participation on part of the landowners is completely voluntary.

Speaker LoRenzo Bates (Nenahnezad, Newcomb, San Juan, Tiis Tsoh Sikaad, Tse’Daa’Kaan, Upper Fruitland) was also in attendance at the meeting, and offered his continued support for the Eastern Navajo Land Commission and thanked both federal and tribal officials for working cooperatively to restore trust land for the Navajo Nation.

In preparation for the second round of the Land Buy-Back Program, landowners are encouraged to contact their local Office of the Special Trustee or to call the Trust Beneficiary Call Center at 1-888-678-6836, in order to ensure their contact information is up-to-date and that the Office of the Special Trustee has their correct information, such as their correct date of birth and spelling of their name. More information on the Land Buy-Back Program for Tribal Nations is available at https://www.doi.gov/buybackprogram.

Information courtesy of the Navajo Nation Office of the Speaker