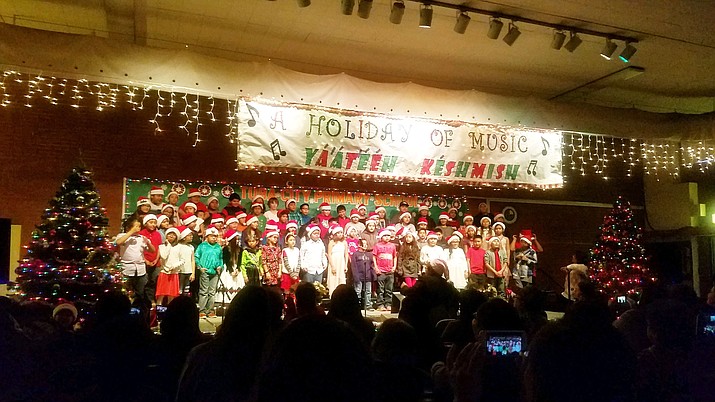 Tuba City Primary students gave their final public performance at the old Tuba City Primary cafeteria. After the 2017 Christmas holiday break, all students will now be housed in the newly built ‘digital’ school. The new elementary school on Fir Street has been christened and is now in full operation as of January.

TUBA CITY, Ariz. — The last public and community student performance was given at the old Tuba City Primary School on Main Street in uptown Tuba City, before the move to a new school after break in January.

The theme was “Holidays in Music.”

Music teacher Maria Ferrer, along with volunteer junior high teacher Vilma Morala, acted as choreographers for the evening program with a mixed cultural program, which included all students in from Tuba City Primary from kindergarten to fifth grade.

The ESS LifeSkills class at the TC Primary performed and were given a loud round of applause for their musical selection by the attending crowd.

Ferrer wanted to focus on students learning about musical sight reading and vocals so they could experience how learning these music skills would give them a better understanding of how music and dance can work hand-in-hand for a public performance.

Ferrer got her fellow teacher, Vilma Morala, to assist her in teaching the students about hand and foot song choreography.

The student performers worked on synchronized hand movements and gestures to go with the songs they selected for the evening performance.

It turned out not only to be a lesson in math and learning to count the beat of the songs, but it was also fun.

Student performers laughed while enjoying how to count the notes for their performance and they also learned steady teamwork in a group setting.

Though this was the last public student performance that was to be given at the Tuba City Primary, the brand new digital elementary school, newly built directly across the street from the old primary school, is slated to open for full student occupation after the holiday break in early January.

Five hundred and fifty students are enrolled, and the new school will have room for more students.

The new Tuba City elementary school can hold up to 918 full-time students and the school hopes to fill those open slots.