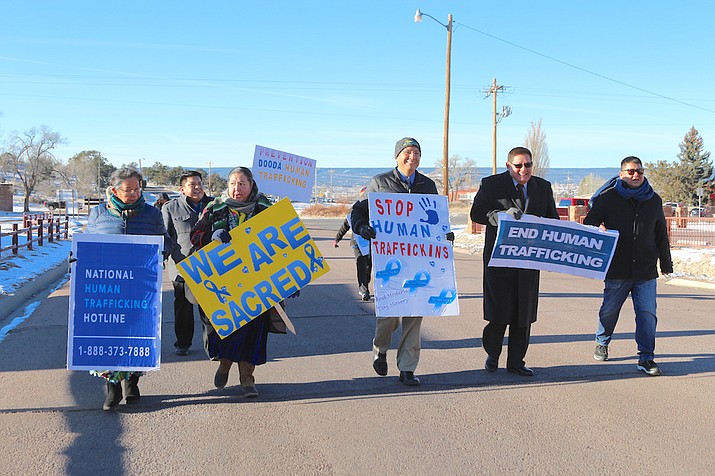 WINDOW ROCK, Ariz. — The 2018 Winter Council session opened with all three branches of government standing in solidarity against human trafficking on the Navajo Nation with an awareness walk and signing of an proclamation.

The walk began at the parking lot near Wells Fargo in Window Rock and concluded at the Navajo Nation Council Chamber.

The Naabik’íyáti’ Sexual Assault Prevention Subcommittee and the Navajo Department of Family Services — Strengthening Families Programs initiated the awareness walk, and a project to address human trafficking on the Nation, bringing to light confirmed cases that have aided in the development of new data indicating that trafficking activity is occurring in some Navajo communities, border towns and truck stops.

Brown, a member of the SAP Subcommittee and the Health, Education, and Human Services Committee, said human trafficking is a silent issue that many people might not notice, but its existence is present on the Navajo Nation.

“I would like people to know it’s on our Nation, it’s in our communities, and especially rural communities,” Brown said. “Our Navajo children are being picked up through social media and trafficked at truck stops or other areas across the United States. In fact, over 51 percent of women and children who are victims of human trafficking are never reported.”

Brown added that he and his SAP Subcommittee colleagues have begun work on the Navajo Nation’s first Human Trafficking White Paper, and have started collaborating with the DFS - Strengthening Families Programs, Office of the President and Vice President, University of Colorado-Boulder Indian Law Clinic, Casey Family Programs, and the Navajo Nation Missing Persons Update Group.

Crotty thanked the Navajo leaders who participated in the awareness walk and said ending human trafficking on the Navajo Nation is a three-branch effort.

“When we think about the communities within the great Navajo Nation, it’s easy to talk about economic development, land issues, and jobs. However, when we start getting to the root of some of our community problems such as trauma, childhood trauma, violence — it takes a special strength and a special kind of leadership,” Crotty said. “I want to thank President Russell Begaye, Vice President Jonathan Nez, and Speaker Bates for not only championing this cause, but also being here with us today to show we are combatting this modern day monster.”

“I appreciate all of you coming out this brisk morning and taking this walk. I want to extend my sincere appreciation to chairwoman Delegate Crotty, it was through her subcommittee on behalf of the 23rd Navajo Nation Council, that we are bringing this awareness,” Bates said. “Today is important, and we can’t let it end today, it needs to continue to be moved forward.”