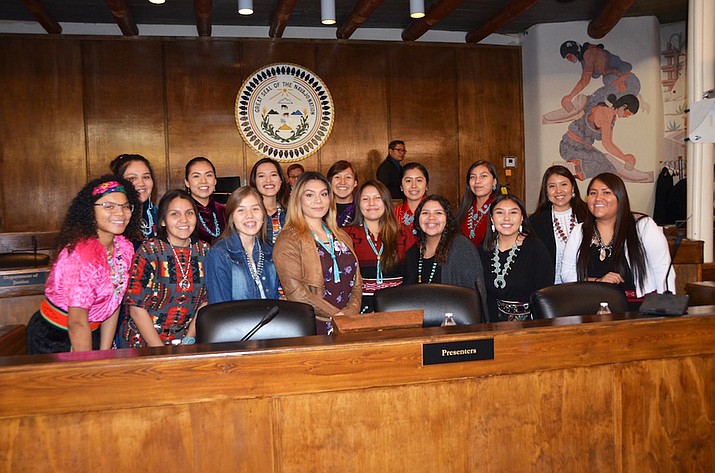 WINDOW ROCK, Ariz. – On the opening day of the 2018 Winter Council Session, the 23rd Navajo Nation Council recognized and congratulated Nicco Montano, a member of the Navajo Nation from the community of Lukachukai, who recently won the Ultimate Fighting Championship inaugural Women’s Flyweight Title.

Chee thanked Montano for being an inspiration for the Navajo people in a time when the Navajo Nation is dealing with many challenges economically, socially and culturally.

“In the midst of all of our challenges, there are always special people who find a way to inspire and uplift us,” he said. “It is an honor to have the UFC Champion with us today and it warms our hearts to know that you come from Lukachukai – from the Navajo Nation.”

Speaking on the Council floor, Montano thanked all of her supporters and her family for providing the inspiration and ambition for her to pursue her goals, which ultimately led to her achievement. Bates presented a gift to Montano and congratulated her and her family on behalf of the 23rd Navajo Nation Council.

During the opening of the session, the council also honored and recognized the St. Michael High School girl’s volleyball team for winning the 1-A State Championship, two-time American Youth Bullriding Champion Jacob David from Grand Falls, the family of the late Verner V. Duus, and the family of David and Darlene Peshlakai.

In partnership with the Office of Broadcast Services, the Navajo Nation Council is live-streaming the Winter Council Session on the Council’s designated Ustream channel. More information or to view live-proceedings visit ustream.tv and search for ‘Navajo Nation Council’ in the search box.