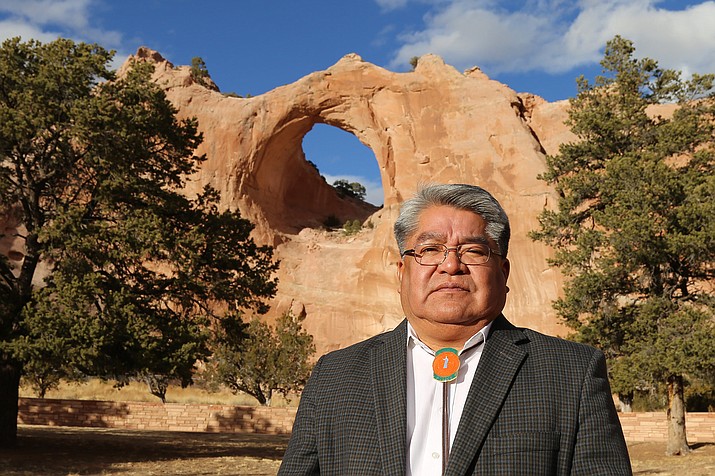 Jesse Delmar, director of the Navajo Division of Public Safety, was appointed to the Alyce Spotted Bear and Walter Soboleff Commission Jan. 3.

WINDOW ROCK, Ariz. — Jesse Delmar, director of the Navajo Division of Public Safety, was appointed to the Alyce Spotted Bear and Walter Soboleff Commission on Jan. 3 to provide for the education, health and safety of Native American children.

“I am honored to be selected to serve Indian Country and represent the Navajo Nation,” Delmar said. “As far as policing is concerned, we really need to be proactive in producing productive citizens. We need to be turning lives around and we need to start with our kids. A lot of our Native children are, unfortunately, exposed to domestic violence, alcoholism, drug abuse and so on. We need to somehow impact those young lives and, with this appointment, that’s what I intend to do.”

The 11-member commission was created by the Alyce Spotted Bear and Walter Soboleff Commission on Native Children Act, sponsored by U.S. Sen. Heidi Heitkamp, D-N.D. The U.S. President, Senate Majority Leader and Speaker of the House of Representatives each appoint three members to the committee. The Senate and House minority leaders each appoint one member.

President Donald Trump appointed Delmar. The Navajo Nation Office of the President and Vice President extended its appreciation to him for the selection.

Delmar is one of eight commission members, who are expected to have expertise in areas of juvenile justice, social work, education, mental health or physical health.

“Director Delmar does a great job leading the men and women who keep us safe, and he is an outstanding choice for the Alyce Spotted Bear and Walter Soboleff Commission,” he said.

Vice President Jonathan Nez said many of the Nation’s youth face modern-day monsters such as substance abuse and suicide.

“Youth and families are taking back their communities by respecting authority and participating in discussions about our social ills as a family,” Nez said. “Families need a champion and I am pleased Jesse Delmar was selected to be part of the commission to help Native American children across the country.”

When the commission is fully appointed and funded, members will convene to determine how to better use existing resources, increase coordination, measure outcomes, develop stronger data collecting methods, remove obstacles to public-private partnerships and implement best practices in Native communities. This report will give federal agencies guidance to address the needs of Native children