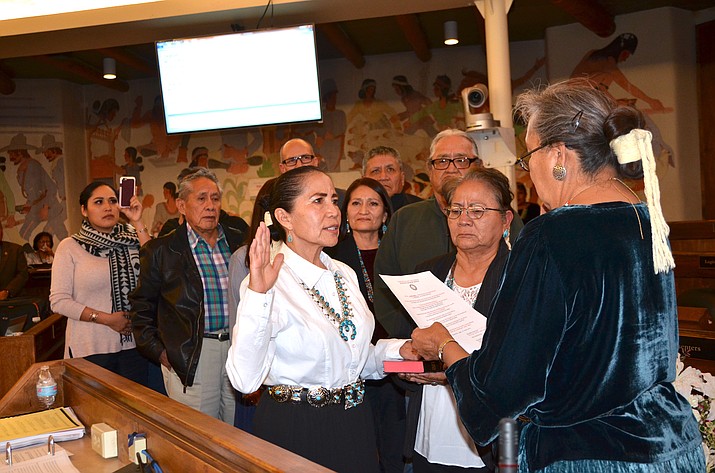 WINDOW ROCK, Ariz. — On Jan. 24, the 23rd Navajo Nation Council approved the appointment of JoAnn Bitsilly Jayne as the probationary Chief Justice for the Navajo Nation Supreme Court, for a period of two years.

Following the probationary period, legislation will be introduced to consider Jayne’s permanent appointment to the Supreme Court.

According to Legislation No. 0273-17, the Law and Order Committee approved Resolution LOCJN-08-17 to recommend Chief Justice Jayne to the Supreme Court position, and President Russell Begaye issued the appointment in July 2017.

In support of the legislation, Council Delegate Leonard Tsosie (Baca/Prewitt, Casamero Lake, Counselor, Littlewater, Ojo Encino, Pueblo Pintado, Torreon, Whitehorse Lake) said he believed Chief Justice Jayne met all the qualifications to serve as the head of the Supreme Court, and requested that she review state and federal case law opinions that continue to work against the Navajo Nation in terms of court rulings.

“I would like to see strong reasoning from your office that would confront the thinking of state and federal judges, and tell them they are wrong in their court opinions that disfavor the Navajo Nation, our laws, and our sovereignty. I am hoping you can address these issues and persevere in these matters,” Tsosie said.

Tsosie also cautioned Jayne from “legislating from the bench,” and encouraged her to remain unbiased in upholding Navajo Nation law and ensuring the integrity of the Supreme Court.

Council Delegate Walter Phelps (Cameron, Coalmine Canyon, Leupp, Tolani Lake, Tsidi Tó’ii) praised Chief Justice Jayne’s educational background and her determination to return home to the Navajo Nation to work for her people. He recommended she begin looking at the court structure and determine how it might aid in economic development.

“Perhaps an area of focus would be companies that want to do business on Nation, but the hurdle for them is to submit to Navajo Nation jurisdiction. Maybe a business court can address business related issues so that we can create a business-friendly environment. It’s a huge area that our courts have not really focused on,” Phelps said.

He added that a potential business court could aid in creating more jobs on the Navajo Nation, and said he looks forward to future dialogue in establishing the court. Phelps said he is also pleased with the chief justice’s education in agriculture, hydrology, and watershed management, which are pertinent to several water issues the Navajo Nation faces.

During the debate on the appointment legislation, some Council members raised concerns regarding Chief Justice Jayne’s understanding of Navajo fundamental law, cultural protocols and the utilization of the Navajo language.

Council Delegate Tom Chee (Shiprock) said he is hopeful that the chief justice, like many Navajo-speaking individuals returning home, will re-learn her language and continue to acquire additional traditional knowledge as time progresses.

“We need to value the Navajo language because the English language is very limited, but it is through Navajo that we can make our point clearly. It encourages us to understand Fundamental Law,” Chee said. “I presume she will put out the effort and redefine the language for herself. I support her candidacy because she will give inspiration to everyone who are still learning Diné Bizaad.”

Council members voted 17-3 to appoint Jayne as the probationary Chief Justice to the Navajo Nation Supreme Court. The Navajo Nation Council serves as the final authority on the bill.