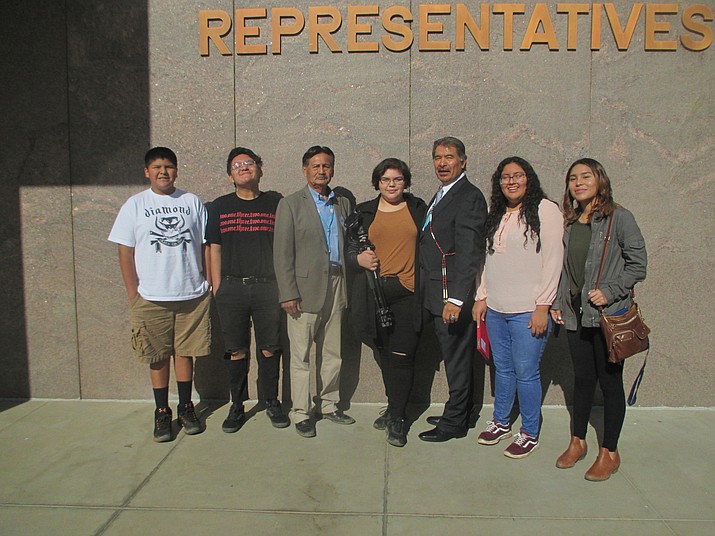 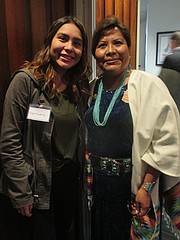 PHOENIX — Five Hopi High media students not only attended Indian Nations and Tribal Legislative Day Jan. 10, but were the only students allowed on the floor of the House of Representatives, where they heard speeches by tribal leaders.

Arizona State Rep. Sally Gonzales allowed the students onto the House floor as her guest.

Hailey Kardell, a video student at Hopi High, said the gathering was a great experience.

“It was nice to see the tribes come together and speak about the things they need done to make life better,” she said. “Getting on the House floor was surreal. You don’t get onto the House floor unless you’re a representative.”

Kardell said she learned a lot about who represents the different tribes and she heard stories about the various tribes. She thought Begaye gave the best speech given from tribal leaders. She said tribal leaders showed they know what they need. She said they are good leaders.

“He was really hype. He knows how to deliver a speech, even though the other speakers got their point across,” she said. “Begaye made sure we got the message.”

Before the speeches, several vendors were on the capital lawn to tell visitors about their agencies. Kardell said she enjoyed getting pens from each of the vendors. She said the event would have been improved if the speakers were given more time to speak.

“This event is important because there are things that need to be done,” she said.

Kardell’s advice for youth who attend this event in the future is to ask why.

Ellyse Fredericks, a Hopi High print journalism student, said the day was a great experience because she was able to meet different people and learn about the importance of the event.

“I learned about different tribes’ issues and ways to support one another,” she said. “Being on the floor of the House of Representatives was a great experience.”

Fredericks said last year she had to watch the proceedings from the top of the gallery.

“This year I was near the representatives,” she said. “After seeing the tribal leaders, I thought it was an honor to be sitting by them. I think it’s important that they represent their people because they can help solve their own tribal issues.”

Fredericks said the highlight for her was interviewing Begaye. She said the event would have been improved if more students attended.

“It’s definitely a great opportunity for all youth. It is important to understand the struggles we face and support each other,” she said. “For future students, take the opportunity to meet tribal leaders and use their advice to help you and your people in the future.”

Kelly Johnson and Gabe Fredericks on the House of Representatives floor.

“I was surprised that only our five students, including me, were the only students on the floor at the capital in Phoenix,” he said. “It felt very special to be there so I was happy I was there.”

Lilly said he learned about the various problems that tribes face. Like the others, he felt Begaye gave the best speech. But his favorite person was Gonzales because she got the group on the House floor.

“I felt special. In a way we were important and not just regular people,” he said.

Lilly said he appreciated that the tribal leaders were trying to fix problems on their reservations. He said the leaders gave him pride and dignity about who we are as Hopi and Navajo. He said the gathering would be improved if they had it monthly rather than annually. He said the event was important because it brings attention to problems that need to be fixed.

His advice to students who attend in the future is that they pay attention to what is said so they can join the fight to fix the problems.

Kelly Johnson, a print journalism student at Hopi High, said she was happy to see friends from other schools attending and it was exciting to be on the House floor with tribal representatives, House representatives and Senators.

“I learned that tribal leaders care about their indigenous tribes,” she said.

Johnson said Begaye gave the best speech because he was passionate about how important education is to the Navajo Nation.

“I felt excited to be on the floor of the House of Representatives. I felt like a real journalist. I enjoyed listening to the tribal leaders speeches,” she said. “The tribal leaders care about the importance of education to the kids.”

Johnson said the state leaders showed how much they interact with the tribal leaders and they care about the tribal lands. She said the highlight for her was meeting Begaye.

“He was inspiring. It made me happy to see him speak about the Navajo Nation and the struggles that we’ve been through,” she said.

Johnson said the event was important because it allowed the tribes to come together. Her advice to students attending the event in the future is to pay attention and listen to what the leaders say.

Gabe Fredericks, a Hopi High video student, said he learned about the tribes problems and it was fun to be on the House floor because it made him feel important. He said the tribal leaders felt powerful, but he was able to relate to them. He also appreciated tribal leaders because they want to make laws to improve Arizona.

Fredericks said the highlight of the event was that he was able to record it on his video. He said the event would be improved if people attending knew more about it before attending.

“It’s an important event because nations’ get to voice their concerns,” he said.

His advice to students attending in the future is to be prepared, to have an open mind and students should embrace their culture.