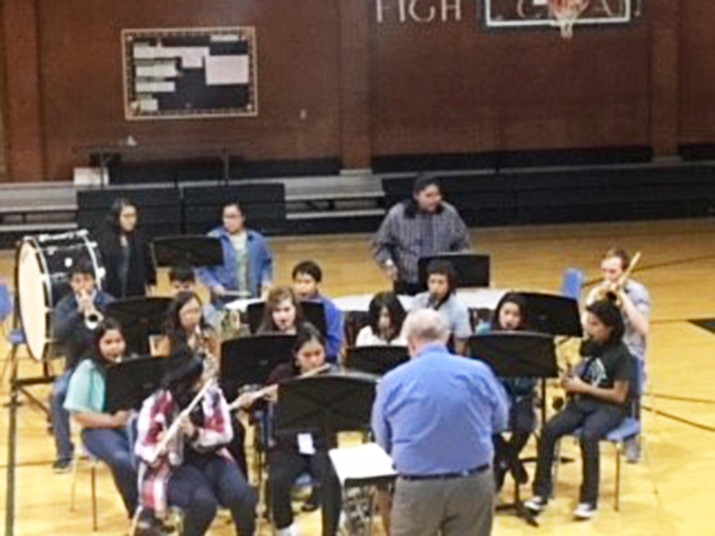 The music program at TCUSD begins formally in the elementary level with rudimentary lessons in rhythm, basic counting and general knowledge about musical notes, their varied sounds and how to play an instrument with discipline and interest.

But a more finely tuned and focused music program has been offered now in both the junior high and high school at Tuba City under the direction of Morris Nesmith.

Nesmith, who is originally from Wyoming, was raised near the Wind River Reservation, near Thermopolis and played with several of the local state associated bands.

In college, Nesmith participated with both the marching band and also in the college choir program. At 19, Nesmith was hired to perform with a group called the Big Band Sound, his first real professional paying gig.

Before coming to Tuba City District, Nesmith taught music in New Mexico, Wyoming, California and other areas in Arizona.

After seeing a newspaper advertisement for a music teacher at TCUSD, Nesmith and his family moved to Flagstaff in 2000.

“They were crazy enough to hire me! But it has really turned out that I was the lucky one in this job discovery,” Nesmith said. “My work here has turned out to be such a blessing. I have had the opportunity work with really smart students and as an added bonus, working and living here, I have also had the honor to learn about both Hopi and Navajo people and their beautiful cultures.”

Nesmith works with both junior high and the high school music students at TCUSD.

Although this blending wasn’t originally planned, it became necessary to combine both schools when the longtime Tuba City High School music teacher retired and left an empty job spot.

“At first, it was a bit hectic to blend both programs. It was a daily lesson area and then it started coming together really well,” Nesmisth said. “Everyone including me had to really focus on the work. We focused on counting and phrasing. But now it just seems really natural to have both age levels of students working together.”

As for the recent public pre-Christmas program given before the school vacation break in December, Nesmith said, “I didn’t really want to have an exclusively Christmas themed program. I wanted to show respect for all the varied cultures of people who work and live here in Tuba City…some of our doctors and nurses and other service providers in our schools are from other countries as well as varied tribal cultures, so I wanted to make them feel included in our public presentation.What is thrilling, is watching and seeing how many of our piano and advanced band students are really improving and can now play much more difficult pieces. They do show serious promise.”

This year’s TCUSD music-band program has participated in not just the seasonal parent focused programs, but also have played in the Tuba City High Homecoming parade and at most home games and also the high school pep rallies.