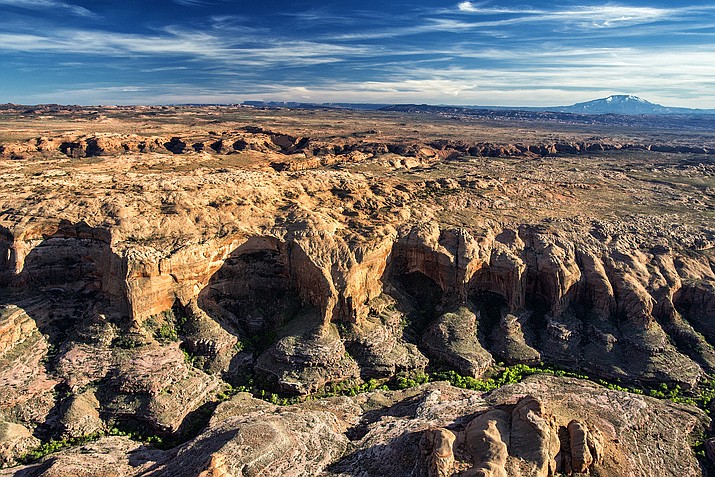 Congress is considering a bill that could potentially cut Bears Ears National Monument from 1.35 million acres to 200,000.

WASHINGTON — Navajo Nation President Russell Begaye took a stand for tribal sovereignty and preservation of the Navajo way of life Jan. 9 when he urged Congress to strike down a bill that would slash 85 percent of the land from Bears Ears National Monument.

“Protection of these lands is not negotiable,” Begaye said. “The landscape, as originally designated, is essential to the Navajo people and to the Navajo way of life. Diminishing the size of the monument puts hundreds of archeological and cultural sites at risk, and threatens our ability to strengthen our people, practice our religion and pass our traditional practices on to the next generation.”

“The Curtis Bill is not tribal-friendly,” Begaye added.

The hearing comes a month after U.S. President Donald Trump issued a proclamation calling for an 85 percent reduction of the monument. It also follows a report issued by Interior Secretary Ryan Zinke and commissioned by the White House that found Bears Ears was not the “smallest area compatible” with the purpose of the national monument designation.

In his Dec. 4, 2017, proclamation, Trump called for exclusion of 1.15 million acres of land he determined was “unnecessary for the care and management of the objects to be protected within the monument.”

The Curtis Bill seeks to codify Trump’s proclamation and limit the authority of the Bears Ears Commission, a planning entity comprising of representatives from the Navajo Nation, the Hopi Tribe, the Southern Ute Indian Tribe, the Ute Mountain Ute Tribe and the Pueblo of Zuni. The commission, formed under Obama’s proclamation, is tasked with engaging with the Interior and Agriculture departments to determine management strategies for the national monument.

The Navajo Nation, along with the other four tribes represented by the Bears Ears Commission, filed a lawsuit on Dec. 4, 2017—the same day Trump signed his proclamation. The lawsuit challenges Trump’s authority under the Antiquities Act of 1906 to reduce or rescind national monuments.