Get ready to Rumble, Flagstaff
Annual Rumble on the Mountain features local artists, musicians, dancers and speakers highlighting the people and sacred lands of the Colorado Plateau 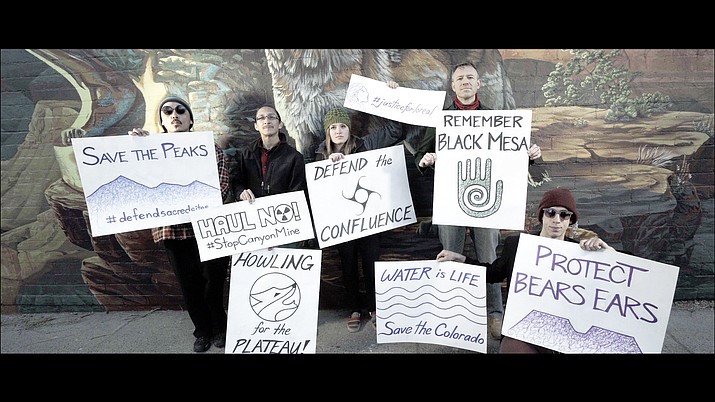 Hunter RedDay, Ed Kabotie, Anneke Heimlich, Richard Davis and Alec Tippet display placards of issues, which will be discussed at Rumble on the Mountain, on the sacred lands of the Colorado Plateau. 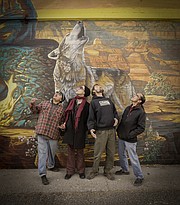 Tha 'Yoties will perform at Rumble on the Mountain Jan. 20 in Flagstaff at the Coconino Center for the Arts. Tha 'Yoties band, (from left) Hunter Eagleman RedDay, Alec 'Coy-Wolf' Tippet, Andrew 'DJ Soe' Baker and Ed Kabotie howl for sacred lands on the Colorado Plateau in front of a mural by Sky Black & The Mural Mice at the Orpheum Theater in downtown Flagstaff.

FLAGSTAFF, Ariz. — Rumble on the Mountain IV, an annual event to raise awareness of the plight of indigenous people and lands of the Colorado Plateau, takes place Jan. 20 at the Coconino Center for the Arts from 2-7 p.m.

This year, the theme of the event is “Sacred Lands of the Colorado Plateau.” With the Bears Ears scale back leading headlines, Rumble on the Mountain IV will give a geography lesson beginning with the Confluence and exploring all the issues that the surrounding areas face — the Colorado River, the desecration of Black Mesa, the Havasupai and Canyon Mine, the haul route, snowmaking on the Peaks, the uranium issues on the Navajo Nation and Bears Ears Monument.

“All of these things are very intertwined to our life and our identity on the Colorado Plateau,” said Ed Kabotie, event organizer. “I guess I feel like our lives are tied to the land and it is a responsibility to honor and protect it.”

The event combines the talents and voices of indigenous performers, activists and tribal leaders to present a show that is both education and entertainment (edutainment) and will combine music, art and education about the sacred and threatened lands of the Colorado Plateau.

“The entertainment is really people, from their heart, who have a prayerful burden for the Colorado Plateau,” said Kabotie, who is also the current artist in residence for the Museum of Northern Arizona.

Along with the Rumble on Jan. 20 is a month long art exhibit at Fire Creek Coffee Co. The exhibit from the Rumble Arts Collective is made up of several artists and photographers.

“It is just some unique perspectives on the Colorado Plateau,” Kabotie said.

And while there are important topics being discussed, the occasion is upbeat.

“It’s festive,” Kabotie said. “It’s a cry, but it’s also very hopeful because it’s saturated with proactive, authentic voices who are trying to do something — a spiritual voice that offers hope.”

History of the Rumble

Each year, the Rumble has a theme, based on what is taking place in headlines — local, regional and national. The first year of the Rumble, snowmaking was in the news in Flagstaff.

In fact, the name Rumble on the Mountain came about that first year because of the earthquake that happened in 2015.

“We felt this was a spiritual wake-up call to all of us,” Kabotie said. “The Rumble is named in two metaphors, the first being the earthquake, rumble on the mountain, but also that that wake-up call should awaken all of us to fight.”

Kabotie stresses that while it is a fight, the fight is not against individuals or institutions but against paradigms and philosophies.

“Those paradigms and philosophies are not only fueling the industrial mining communities that we’ve suffered under,” he said. “But they are also governing very much our own modern consumer behavior. We’re all a part of the problem and I think that is an important point to recognize before we go pointing fingers at everybody.”

The second year, the show focused on the health of the Colorado River in reaction to the national headline of the Animus River spill.

The Animus River is a tributary to the Colorado River, which is considered to be one of the most endangered rivers in the U.S.

“The health of a river involves a large watershed and this is a river that has been chopped up and bought and sold to states and countries,” Kabotie said.

That year, Rumble on the Mountain made a push for both the Greater Grand Canyon Heritage Monument and Bears Ears National Monument.

The third year was in reaction to Standing Rock in North Dakota, whose story goes back to Sitting Bull and the Ghost Dancers — a tragic story that goes way back.

But the history of the Colorado Plateau goes a long way back, too.

The questions for people on the Colorado Plateau linger in Kabotie’s mind: Do people know where their water and electricity comes from? Do they know the history of it? Do people know about the 500 open pit uranium mines that surround communities close to Flagstaff, the haul route that’s going on, that the largest strip mining operation in the world is on Black Mesa and the only sludge slurry in the hemisphere is here? Do they know about the other pipeline that existed for 35 years that the Hopi were paid 3.3 percent for the value market of coal and given $1.67 for every 364,000 feet of water?

“It’s unconscionable what’s already taken place,” Kabotie said. “And on our reservation, just a 100 miles to the northeast, two-thirds of the people who have running water in their homes, if they have running water, can’t drink it because of arsenic contamination. All of this is right here and has been and is happening.”

Kabotie admits that it is disheartening to see the scaling back of monuments, to see the snowmaking proceed regardless of public outcry or to recognize that Canyon Mine is still in motion. But there is a responsibility he focuses on rather than the wins and losses.

“I think it is important to recognize it’s a responsibility to cry out. That’s our job,” Kabotie said. “You know when a coyote howls, as far as where that voice carries, that is more determined on the wind and other factors. And we hope that there’s a supernatural wind that blows a little bit of consciousness into people’s hearts when we howl.”

Individually, Kabotie said people need to try to maintain a sense of balance in a world that is out of balance while also evaluating themselves by becoming re-acquainted with natural cycles — with the rising and setting of the sun, the cycles of the moon and the stars and recognize it’s a bigger universe that everyone is a part of and connecting with that in a personal way.

“The biggest thing that each one of us can do, I think, in this whole mess is be responsible for our sense of spirituality and our own conscious,” Kabotie said. “I think when that is taking place, that’s when we’re really able to contribute the best things to the solution. Then it’s not just about pointing fingers and blaming. Then I think we’re bringing our best thoughts and our best hearts to the table.”

And that, in essence, is what the Rumble is about. Kabotie wants people to be affected by what they hear, but affected in a way that is positive and not critical or blaming.

“I’m angry about a lot of things and I carry a lot of bitterness, but working from that is not helpful,” Kabotie said. “When I’m recognizing that I too am part of the problem, that’s when I’m open to hearing other people’s voices and I think I’m making the best contribution of myself. Even if one person has an ‘ah ha’ moment, I mean, that’s worth all the effort we put into it.”

For Kabotie, the Rumble is personal because even he gets confused by everything that is happening on the Colorado Plateau and all the intricacies and all the ways they fit together.

“It is a very complicated grid that has created the exploitation of the area. The history and the politics are so hard to follow,” he said. “I think the Rumble is just as much a personal pilgrimage, a personal desire for growth. I want to understand the issues.”