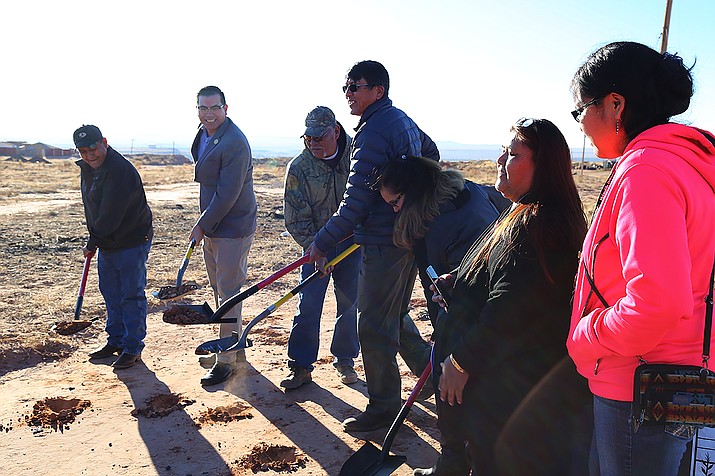 Groundbreaking for the 36 new homes in the Former Bennett Freeze Area began on Dec. 19. Submitted photo

TUBA CITY, Ariz. — Groundbreaking for the construction of the first of 36 new modular homes in the Former Bennett Freeze Area (FBFA) began Dec. 19 and construction is underway.

Funding for the project, which includes the renovation of 45 homes and assistance for 54 home site leases, was ratified by Navajo Nation President Russell Begaye this past summer.

“I want to thank all those involved with the efforts to get homes to Navajo, especially to those in the Former Bennett Freeze Area,” Begaye said. “There’s a need to right the wrongs imposed on the people of this region by the federal government. Let’s use this momentum to continue to move forward with housing.”

The $3 million dollars for the grant agreement comes from the Undesignated, Unreserved Fund Balance (UUFB) and from the FY 2017 Comprehensive Budget.

In addition, Begaye and Vice President Jonathan Nez sat down with Navajo Housing Authority (NHA) to draft an agreement to provide funding for the foundations for the 36 modular homes, which was estimated at $750,000. NHA is providing matching funds.

Nez said that the Office of the President and Vice President (OPVP) advocated funding to see tangible results for the residents of the FBFA.

“For 40 years, our people had to make repairs to their homes in secret due to the Bennett Freeze,” Nez said. “Our people have been forced to live in 1966 for over four decades. Now that the freeze has been lifted, we need to see genuine action.”

In 1966, Bureau of Indian Affairs Commissioner Robert Bennett implemented a freeze on development of approximately 1.6 million acres of land because of disputes between the Navajo and Hopi tribes. The decision is regarded by Begaye and Nez as a form of oppression because it prevented families in the region from mending corrals, building and renovating homes.

Since 2009, when President Barack Obama lifted the Bennett Freeze, the Navajo Nation has been working to rehabilitate the FBFA.

“Every new home constructed in the former Bennett Freeze brings us closer to creating a stable and healthy living environment for our families,” Phelps said. “We look forward to more groundbreakings. Thank you for the hard work of everyone involved.”

Efforts to obtain funding for the 36 new homes, 45 renovations and assistance for 54 home site leases began with the signing of a memorandum of understanding (MOU) between NHA and Navajo-Hopi Land Commission Office (NHLCO) to do an assessment of all the houses in the area. Chapter officials were trained by the Navajo Nation, including former OPVP Executive Staff Assistant Angie Cody, to do assessments on existing housing and plot the locations using Google Maps.

Information gathered through the assessments was organized and this facilitated the process for chapter officials to design maps that included the proposed areas for construction, renovation and assistance. In this way, the project was largely community-based.

Along the way, numerous government officials provided assistance, including staff from NHA, OPVP and NHLCO. Begaye and Nez toured the area numerous times to visit with the families to provide encouragement and reassurance.

Begaye said that dedication was required to bring the project to where it’s at now and the Navajo Nation is committed to developing infrastructure on the FBFA.