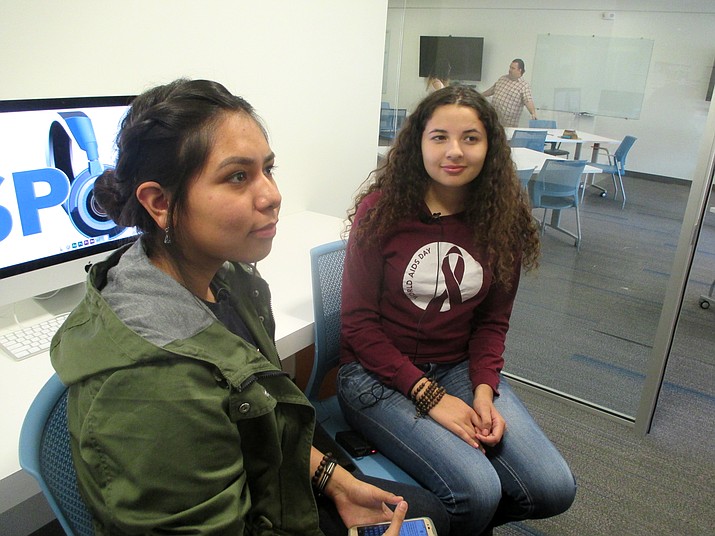 TEMPE, Ariz. — Six Hopi High media students learned about Spot 127, an after-school media program in the Phoenix area, during a recent trip to the valley.

The media program is primarily for high school students, but also has internships available for students attending college in the valley.

Spot 127 has two locations with one in west Phoenix and the other in Tempe.

Rick Fowler, instructional facilitator at Spot 127, said the program teaches audio, video and photography, but sometimes has specialties like podcasts and culinary videos.

Spot 127 is publicly funded and has a youth newscast on KJZZ, a National Public Radio affiliate. Two reporters from KJZZ also work from the site.

“Sometimes they get to broadcast to the nation,” he said about students whose stories are picked up on NPR.

Fowler said Spot 127, which started in 2012, also promotes its students through social media.

Spot 127 takes the internship applications each May for both high school and college students. It also gets daily meals from St. Mary’s Food Bank, so the students always get to eat.

Spot 127 teaches media students everything from how to use the equipment to how to interview. It purchased around $45,000 in equipment when it first opened to have more audio and video equipment than most schools.

“Everything is student driven,” Fowler said. “I love the equipment and I love teaching high school and community college students.”

Fowler taught at a community college before coming to Spot 127 and found he had to teach students to unlearn their bad habits.

“Now they can learn it right the first time and I know how to train them because I know what colleges expect,” Fowler said.

Students at Spot 127 learn everything from digital media to filmmaking.

Fowler boasts that one of Spot 127’s students won a Rocky Mountain Student Production Award, which he said is the equivalent of the student Emmys. He said Spot 127 regularly enters its students in contests.

“We like to promote our students work because they do great work,” Fowler said.

Olivia Parker, a college intern at Spot 127, said she has worked on photography, video and audio projects at Spot 127. She also learned interviewing skills. She especially enjoyed two projects. One was making commercials that were viewed at Harkins Theater. Also, students from Spot 127 had their photos hung at Peta Jungle, a restaurant, and the photos were for sale for students to make money.

Parker said she enjoys Spot 127 because it is a family environment.

“You won’t find another program like this that is free anywhere else,” she said. “This is student driven with their ideas. It’s like a family. You also won’t find equipment like this at other schools.”

Gisselle Loera, another college intern at Spot 127, said Spot 127 gives students a voice. She said it gives students the equipment so they can learn how to produce good journalism.

“The equipment is top of the line,” she said. “Journalism is about not being afraid to look for the story.”

“Their equipment was outstanding and the students were able to attend sessions for free,” she said. “Rick Fowler was absolutely sweet. He showed his working place to the students. We all enjoyed it because it was so professional looking.”

Ellyse Fredericks, a print journalism student at Hopi High, said Spot 127 is a friendly environment and she admires the equipment.

“It’s a school I would like to apply to,” she said.

“They had a lot of equipment that I hope to work with one day,” she said. “It was nice to see a non-profit building to teach students about the technology they have to help them learn new skills about media.”

Kardell said Fowler was her favorite person that she met on this media trip.

“He was a really cool guy. You can tell he loves his job and is very passionate about it. Plus, he let me use his studio light, which was pretty cool,” she said.

Kardell said the tour was fun.

“It was a little short, but it showed pretty much all of the main places inside of the building,” she said.

Kardell said the tour would have been improved if it was longer and more in depth but the trip motivated her to do more with journalism.

“It’s nice to see that there is more than writing journalism. I don’t know if it’s right for me, but I know the skill I gain will help,” she said.

Kardell said the media trip was important to her because it gives her more knowledge about the different types of journalism.

Fredericks said she found the tour at ASU exhausting, but now she has it in mind for consideration after she graduates. She said the overall trip was important because it inspired her to pursue a career in journalism so she could travel and meet new people.

“I was able to learn more about journalism, especially the opportunities that’s given to those who want to work in the news area,” she said.

Labahe said the tour was fun because it reminded her of the dream she is chasing and that it’s not impossible to get to college. She said the trip inspired her to do more with journalism, especially photography.

“The trip was important to me because I met people who I could relate to especially right now. This trip was helpful to get me back on the right path,” she said.