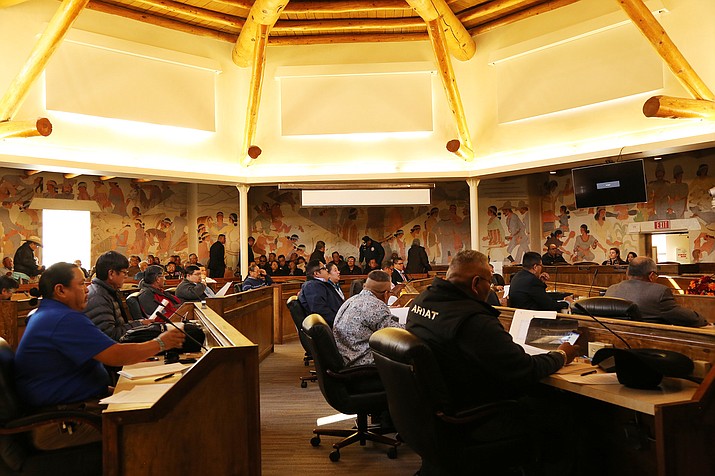 Council Delegate Tom Chee (Shiprock), who sponsored the override legislation and the legislation approved by the council in October, had previously explained that the intent of the bill was to clarify specific definitions within the Navajo Nation Code that guide the administration of funds that are held in the Veterans Trust Fund to provide more dollars for direct services for Navajo veterans.

Chee also noted that the language contained in the legislation resulted from numerous meetings and discussion held over several months with veterans groups and organizations, the Department of Justice and the Office of the Controller.

“I thank the veterans for their support and I also thank my colleagues for supporting the veterans with their votes today,” Chee said. “The overall goal in this process is to increase annual funding to provide direct services for Navajo veterans.”

Furthermore, Chee emphasized the legislation does not cease funding for the veterans housing program, nor does it diminish the growth of the Veterans Trust Fund principal.

Begaye issued a press release that said he vetoed the legislation because of the unclear language in the measure and said the council must now introduce new legislation to clarify the act.

“It’s unfortunate because this legislation does not actually support the veterans, it provides false hope to them,” Begaye said. “The Office of the President and Vice President (OPVP) has met with council several times on this issue and we’ve suggested options to further the intent of this legislation while correcting the language. All efforts have been disregarded and the council has used our veterans as political collateral.”

Begaye argues the legislation effectively stops the Veteran’s Housing Program by redefining the set aside allocated to funding the program, to now become the Trust Fund income.

However, according to an analysis provided by the Office of Legislative Counsel (OLC), the president’s veto memorandum dated Nov. 6, misquoted and incorrectly presented the new language approved by the council by negating the word ‘income,’ which changes and mischaracterizes the application of the amended language.

“When the word ‘income’ is correctly included, the president’s argument that the ‘amendment directs the entire 4 percent to now be appropriated into the Trust Fund income’ fails,” the analysis from OLC states. “The amendment does not co-mingle the separate set-asides to the Veterans Trust Fund and to the Housing Program for Veterans. The amendment, in fact, only changes the character of the annual set-aside to the Trust Fund and does not affect the Housing Program for Veterans’ annual appropriation, i.e., set-aside, at all.”

Council Delegate Seth Damon (Bááháálí, Chichiltah, Manuelito, Tsé Lichíí’, Rock Springs, Tsayatoh) has also introduced Legislation No. 0191-17, a separate bill that would increase the annual set-aside from four percent of the Nation’s annual revenues to 10 percent. He previously said the bill will maintain an investment into the principal of the Veterans Trust Fund and increase the amount of annual funds that provide direct services to veterans.

The Navajo Nation Council approved Legislation No. 0466-17 with a vote of 22-0 and serves as the final authority for the bill.