The biggest federal tax overhaul in 30 years: Native tribes not included
A $1.5 trillion dollar increase in the federal deficit will create pressure to cut federal programs and services important to tribal communities 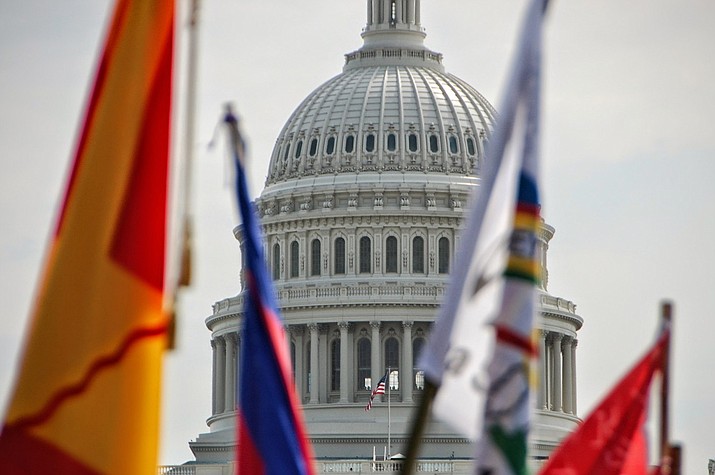 Congress recently passed one of the most significant adjustments to federal tax policy since 1986. Vincent Schilling

WASHINGTON — Congress passed some of the most significant adjustments to federal tax policy since 1986 in December. This tax reform by federal legislators does not afford tribal governments many of the benefits, incentives and protections available to state and local governments.

The matter did not move forward without notice as tribal leaders, lawmakers and tribal organization advocates fought for inclusion into the legislation in the form of added tribal provisions.

On Dec. 13, Congressman Dan Kildee (MI-05), along with 37 other Members of Congress, sent a letter to U.S. Representatives and Senators serving on the conference committee concerning the Republican tax bill. In their letter, Kildee and other members express sought to change the final bill, since the version that was rushed through Congress negatively and unfairly affects Indian Country.

“We write to you today with disappointment in the failure of Republicans to include tribal governments in either the House or the Senate versions of their tax bill. As the conference process proceeds, we urge you to consider the needs of Indian Country in the final bill. The federal tax code does not recognize the unique sovereignty of tribal governments and as a result, tribes do not enjoy the same benefits as state and local governments under the tax code.”

“The Senate had several opportunities, both in committee markups and through proposed floor amendments, to fix the issue of tribal taxation in the tax bill. Yet it inexplicably failed to do so. And now tribes are told that yet again, they must wait for some future work on tax reform. This is completely unacceptable,” said the release.

Hoeven said last month he held an oversight hearing to examine measures to empower tribal economies through tax reform, including my Tribal Economic Assistance Act and why he is working to include an amendment to expand and enhance public financing mechanisms for tribal governments in the final tax reform package.

“This legislation would help tribal governments tap into a market of nearly one billion dollars annually in tax-exempt financing,” Hoeven said. “As chairman of the Senate Indian Affairs Committee, I will continue to work with Indian Country to identify opportunities to modernize burdensome and antiquated tax policies that prevent economic growth.”

An emailed statement from NCAI President Jefferson Keel reflected his position of the importance of tribal inclusion in tax reform. He said Indian Country has waited more than a quarter century for Congress to address tax code provisions that treat tribes inequitably and hinder economic growth in tribal communities.

“Tribal governments from across the U.S. have repeatedly expressed how important federal tax reform is to tribal economic prosperity, infrastructure deployment, and self-determination,” Keel said. “As such, it is deeply regrettable that the House passed and Senate Finance Committee reported out pieces of legislation that fail to take seriously Indian Country’s priorities for tax reform. Ultimately, the Tax Cuts and Jobs Act must be amended to include tribal provisions to gain support from Indian Country.”

“Tax reform is a unique opportunity for Congress to promote tribal sovereignty, self- determination, and self-sufficiency,” he said.

Prairie Band Potawatomi Nation Chairwoman Liana Onnen, who has long worked to further tax parity for her tribe, told Indian Country Today in an email Congress was missing out on an opportunity to make beneficial and much-needed changes for tribes.

“Tribes have worked for years to develop tax priorities and present them to Congress,” Omen wrote. “I, myself, recently testified before the Senate Committee on Indian Affairs about the negative effects of the uncertainty and inconsistency of tax policy application in Indian Country and in support of legislation to address these concerns,”

She said any tribal leader can attest to the complexities, burdens and uncertainties of the tax code that make true economic development nearly impossible for many tribes.

“Congress can address several of these obstacles simply by ensuring tax parity for tribes as sovereign governments,” Omen said. “Treating tribes how state and local governments are treated under the tax laws in many instances would eliminate some of the obstacles that hinder tribal economic development.”

Kildee’s letter as well as testimony offered by Keel of the NCAI make the request for the following amendments to be included in current tax reform, though they were not included:

Both Senator Hoeven’s bill, S. 2012, the Tribal Economic Assistance Act, and Senator Moran’s bill, S. 1935, the Tribal Tax and Investment Reform Act, would amend the tax code to provide tax-exempt bond parity for tribal governments. Currently, tribes are the only governments that are limited to using tax-exempt bond financing for “essential government functions.” The IRS has interpreted this standard to exclude tribal economic development activities even though state and local governments routinely use tax-exempt financing for development projects. This limitation on tribes greatly inhibits infrastructure deployment and economic growth.

Senator Moran’s bill, S.1935, the Tribal Tax and Investment Reform Act, would amend the tax code to ensure tribal governments receive the same treatment as state and local governments for a variety of excise tax exemptions. The disparate treatment under current tax code provisions diverts resources that would be used by tribes to provide government services to their citizens.

The only tribal provision in the House version of the Tax Cuts and Jobs Act would provide IHS parity for recruiting and retaining quality health professionals. Currently, IHS student loan repayment benefits are not tax-exempt even though the same benefits if offered by any other public sector health service provider would be tax-exempt. This disparity puts IHS at a disadvantage, which negatively affects health care services in tribal communities.

“As Republicans continue to rush their tax plan through both houses of Congress, they leave behind tens of millions of Americans — funded by deficit-exploding tax breaks to the absolute wealthiest,” he said. “They are also leaving behind some really important Americans: our Native American brothers and sisters.”

Kildee said for years, issues of taxation and how federal tax policy impacts tribal governments has been a subject of discussion.

“And for those years that we’ve talked about the need for tax reform, there have been continuous promises made to tribal governments that we will deal with these inequities, these issues of double taxation, in tribes,” he said. “For example, the ability of a tribal member who gets an adoption through a tribal court, they don’t qualify for an adoption tax credit.

Kildee said that’s just one example of the many ways that federal tax policy does not anticipate or recognize tribal governments.”

“But they’ve been left behind again,” said Kildee. “This bill should be written in a way that actually addresses the real problems in the tax code. It does not.”