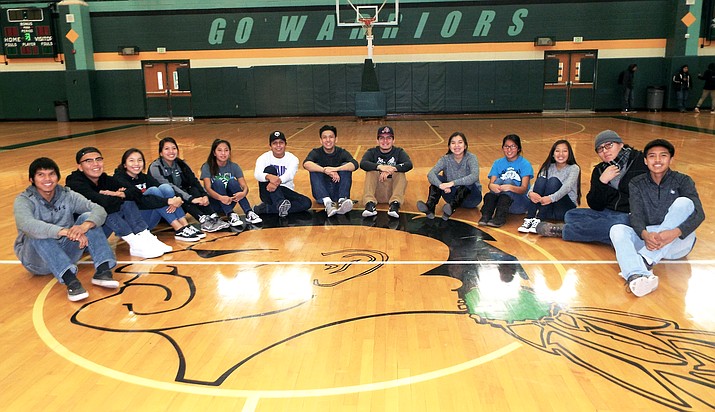 The Navajo Times Allstarts had 84 student athlete nominations forms turned in from various Navajo area and Hopi reservation high schools from their coaching staff and athletic directors to be considered for this prestigious annual high school sports listing.

There were some inquiries for student athletes from Albuquerque and also Phoenix area schools, which were also recognized for the Allstar listing.

The Navajo Times newspaper staff is the final determining vote for the winning group of student nominees.

On Dec. 11, the Navajo Times honored all the final winners at the Phil Thomas Performing Arts Center in Shiprock, New Mexico.

A group photo session for each area of sports excellence was scheduled first, then went to the awards ceremony and then the Coaches of the Year were also named.

This year’s guest speaker for the Navajo Times Allstar event was Nadia Begay-Watson, who is a former Kirtland Central High School former basketball standout who was signed to play Division I basketball for Boise State in Idaho as soon as she left high school.

“Resilience is what our people are about, we have it deep inside,” she said. “We can and need to bring that out in each and everyone one of these kids. Things are not easy, I had to work really hard for all those things I wanted. Player of the Year, Sports Illustrated and All American. You can’t just drop out when things are tough.”

Begay-Watson also was upfront about her own struggles at college. She told the student athletes she had trouble adjusting to college life and had doubts about her own success. But she remembered her traditional Native teachings and thought about her family back home on the reservation and didn’t let those doubts get the best of her.

Begay-Watson went on to lead her Kirtland Central Broncos to two state titles in high school. But she said that once she got to college level playing, homesickness affected her and the realization that while she was the star at high school, but once she got to college playing and she realized she was just a part of the whole team, which she said was a humbling experience.

But Begay-Watson said that also taught her a lesson. It taught her how to be a team player, how to work with others to see a group win and how to use that team strategy in the work place. She encouraged the newest ALLSTAR student athlete winners to use what they learn to help them be successful.

The boys cross country coach Arvis Myron said the young men and women from Tuba City High named to the Navajo Times ALL STARS team are the ones who worked really hard and continue to set high expectations for their teammates. The five athletes for cross country are the leaders of the team and set great examples of how hard work will reap you rewards if they continue to focus on work each and every day.

“Our young and upcoming runners look up to these athletes and know that they must also work hard to continue the legacy of cross country winners from Tuba City High,” Myron said. “This very special Navajo Times award is an indication of a long and successful season of meeting goals that were set prior to the start of summer training months. Total commitment and dedication to running workouts on their own and pushing beyond their comfort zone enabled them to maximize their full potential in the sport of running.”

Myron said the team will miss its seniors.

“But these winning runners have shown the younger runners what it’s like to be at the top of their high school running world by showing hard work and commitment,” Myron said.

The girls head volleyball coach Harlan Barlow was thrilled with his varsity volleyball winners, and it was amazing to see high school team players be recognized like this.

“As a coach, you watch them put in all their hard work and commitment at the gym and then they also have to be on top of their classroom academics to stay qualified to play,” Barlow said. “This is not an easy thing to do. You also get the pleasure to watch them grow and mature along with this athletic process. You want everyone to get recognized but some of these players just go that extra length, go the extra mile to do the very best they can.”