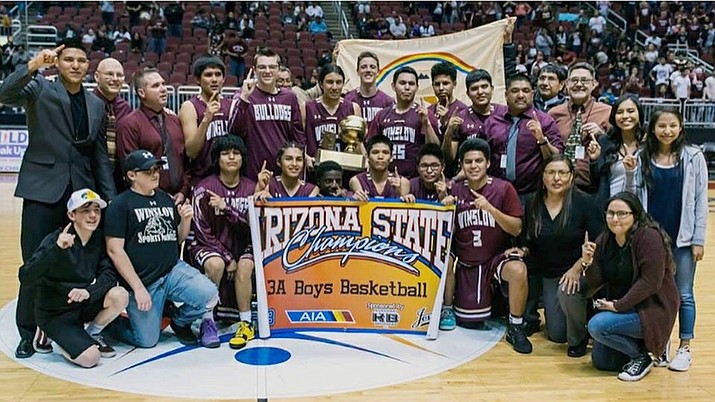 WINSLOW, Ariz. — The Winslow Bulldogs defeated the Blue Ridge Yellowjackets 79-63 in the championship game played in the Arizona State 3A Conference Championship Tournament at Gila River Arena in Glendale Feb. 26.

It was the Bulldogs’ first championship win since 1979.

The Bulldogs got off to a good start and had a 19-13 lead after the first quarter of play. Winslow continued to play well and led 36-24 at the intermission. The Bulldogs had a commanding 59-38 lead going into the final period. The fourth period never saw the Bulldog’s lead go below double digits.

Junior Villanueva led the Bulldogs with 28 points. In double digits for the Bulldogs were Darius James with 18 points and Joann Djassa with 11 points.

Mason Berges led Blue Ridge with 29 points. Darrien Burnette was also in double figures for the Yellowjackets with 18 points. Zach Wagner and Djassa were effective on defense and rebounding for the Bulldogs.

The Bulldogs went into the championship game on against the Blue Ridge Yellowjackets with a record of 26-6. They defeated the Chinle Wildcats 80-68 in the semifinals.

Blue Ridge defeated the Valley Christian Crusaders 59-55 in the semifinals to earn their berth in the championship game and had a 31-3 record.

Winslow schools were not in session Feb. 26, which enabled a large, enthusiastic crowd of students and fans to cheer coach Scott Corum and the Bulldogs on to their state championship win.